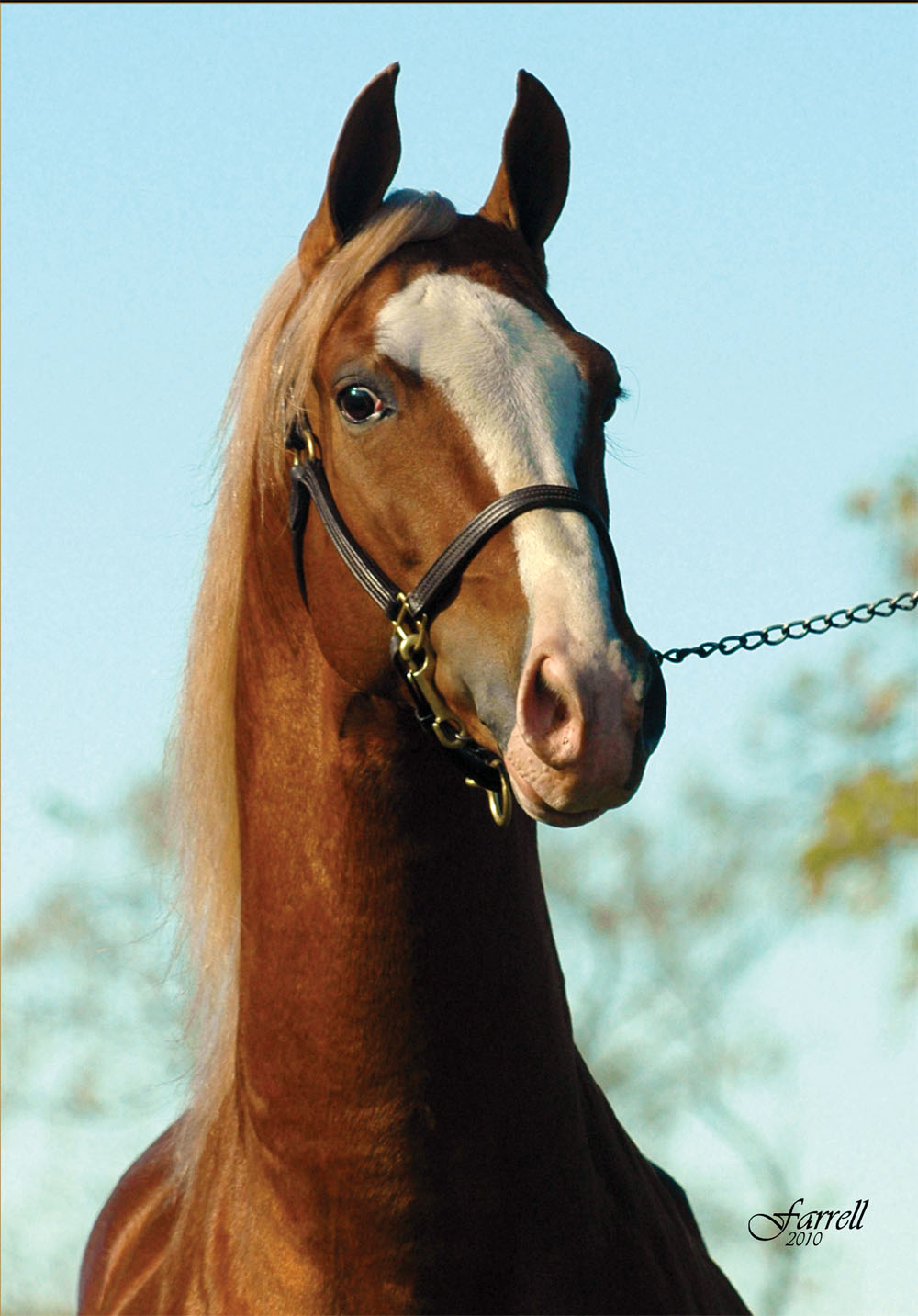 If you’re lucky enough to have a talented colt or stallion, it’s tempting to stand him at stud. Besides the fact that there is money to be made, it is exciting to watch your horse go on to produce winners.

But handling the career of a breeding stallion is a bit like managing that of a rock star — for every glamorous public moment there are five beyond the spotlight that are far less glamorous. It offers real rewards, but the path to success requires a great deal of knowledge, patience, and planning, and there are many factors to consider before deciding to breed your stud.

Joan Lurie knows this better than most. A member of the American Saddlebred Horse Association Breeder’s Hall Of Fame, she opened Willowbank Farm in 1981, along with her partners, Jim and Bonnie Ruwoldt and their daughter, Kathy. Just a short year later, the purchase of the great stallion Attaché propelled the farm into the breeding sector, and today it is home to one of the most renowned Saddlebred breeding operations in the world. In fact, the farm will be honored with the ASHA Breeder Of The Year Award at this year’s Super Convention in Boston, Massachusetts. However, each day is still a challenge, and Joan takes them one at a time.

“There always seems to be a crisis somewhere, either on the mare end or the stallion end,” Joan said. “If you’re going to deal with a lot of livestock you’re going to have a fire to put out every day.”

Joan believes the most important part of managing these stallions is to never rush them. Most stallions reach sexual maturity between two and four years old. Though some may mature earlier, even as yearlings, it is important to recognize the difference between a horse that is physically able to breed and one that is mentally ready.

“Many people have had two-year-old fillies have a foal because they married their colt in the pasture,” Joan said. “But you wouldn’t start a commercial horse at that age.”

A yearling may be fertile enough to get one mare in foal, but it is unlikely that it is fertile enough to breed a large group of mares. Additionally, young colts often lack confidence, and can be easily distracted and put off by correction. Since you want your colt’s first experience in the breeding shed to be a good one, it is important to wait until he is mentally able to handle the job. It can also be a matter of safety.

“Stallions are seasonal breeders, and in the spring and summer when their testosterone goes high they’re aggressive,” Joan said. “They need a year or two of a disciplined regimen to get them educated so they can handle that better.”

In addition to considering your colt’s mental maturity, you should also consider the future. Do you plan to show him? Some horses are able to shift seamlessly between the breeding shed and the show ring — Renaissance Man’s Medici is still in training at Autumn Hills Farm, and Simbara’s Living Legend at Undulata, and both ship to Willowbank for breeding — but not all stallions are this amenable. Once they reach sexual maturity they can continue breeding for the rest of their lives, so there is plenty of time to breed a stallion after his show career has ended. Willowbank’s stallions range in age from six to twenty-two, and many have made the transition from the show ring to the breeding shed.

“I would say you could equate it to letting down a show horse that is going to be turned out,” Joan said. “You do it gradually, and get them into the routine that their new life is going to be.”

What your stallion’s new life looks like will depend largely on his personal needs. Some of the Willowbank stallions prefer to continue working, but most of them enjoy daily turn out. It may take some experimenting to determine which method your horse likes best, but once he has settled in, you can begin making decisions about breeding.

At Willowbank, breeding begins on the first of March and usually ends by the first of August. One of the first things you will need to decide is which breeding method to use with your stallion, collection or live cover. Though Willowbank doesn’t offer live cover because of the volume and geographical locations of the mares it serves, it is often a good option for smaller breeding programs.

“Many people that have a breeding stallion and have their own stock and just a couple outside mares will do live cover,” Joan said. “Even if they have a lot of mares, but they’re going to breed on the farm, it makes sense.”

However, live cover also brings with it concerns about the stallion’s safety; more than one stud has been kicked by an angry mare.

“Most of the time it goes fine, but every now and then it doesn’t go well,” Joan said.

But, while safer for the horses, collecting and shipping semen has its problems, too, especially if you have a horse whose semen doesn’t store well.

“Obviously it’s not going to live forever, but it varies very drastically from horse to horse,” Joan said. “Some store for days and days and others don’t store well at all.”

If you are only breeding a handful of mares a season you can wait and collect as needed, but if your stallion becomes very popular, you may need to come up with a collection schedule such as the one at Willowbank: in-demand horses are collected Monday, Wednesday and Friday.

Whatever method you choose, it won’t take long for your horses to pick up on the routine.

Stallions, however, are not the only ones who benefit from a methodical approach to breeding — your customers will as well. You will need to determine a stud fee, or what you will charge someone for breeding to your stallion. Even if you book by private treaty, the same factors play into this price.

“Customarily a young horse starting out has a lower stud fee because you don’t know what they produce,” Joan said. “If they go along in their career and do well and are successful, people feel justified in raising it up. You also try to keep it kind of in line with what other people in the industry are doing.”

Since almost every horse that is used for breeding has a desirable pedigree, lineage is only one of many ingredients that go into determining a stud fee.

“Having a good pedigree is one thing, but the foals have to be successful to make it work no matter what their pedigree is,” Joan said.

Because of this, patience is the most important virtue when standing a new stallion. Willowbank’s stud fees range from $2,000 to the impressive $8,500 fee to breed to Undulata’s Nutcracker, but stallions don’t start out at these prices.

“It’s a very slow process to get a stallion going,” Joan said. “In the beginning you’ll find yourself giving away a lot of stud fees because it doesn’t matter at that point — you just need to get foals out there.”

Once you decide on a stud fee, you may want to list it in a breeding contract. While contracts are used more often for big operations like Willowbank, it may also be a useful practice for single stallion owners, as it ensures that all parties are on the same page.

“With my own horse I don’t care if anybody has a contract, but that’s just me,” Joan said. “But when I’m handling horses for other people I want everything documented.”

The contract should spell out exactly what the stud fee will be, as well as any shipping charges or sales tax that may be incurred.

“We give one copy to the mare owner, one to the stallion owner and keep one for ourselves,” Joan said.

While some stallion owners are very selective about the mares that are bred to their stallion, Joan employs a more open policy. At Willowbank, anyone who pays the stud fee and fills out the contract can breed to the stallions, and they have rarely run into problems with this policy.

“Most of the people we get are serious about this and try to make good choices and take good care of their horses,” Joan said. “Mare owners are much more educated now than they used to be, and there’s no figuring out what’s going to work, anyway.”

To some it may seem like too much of a gamble, but that uncertainty is the beauty — and the challenge — of breeding, and something newcomers would do well to bear in mind.

“Keep your expectations realistic,” Joan said. “More of it doesn’t turn out the way you want than does.”

But to Joan, at least, the gamble is still worth it. It is challenging, inspiring and consistently exciting. And, every now and then, life gives you a day when everything goes right.