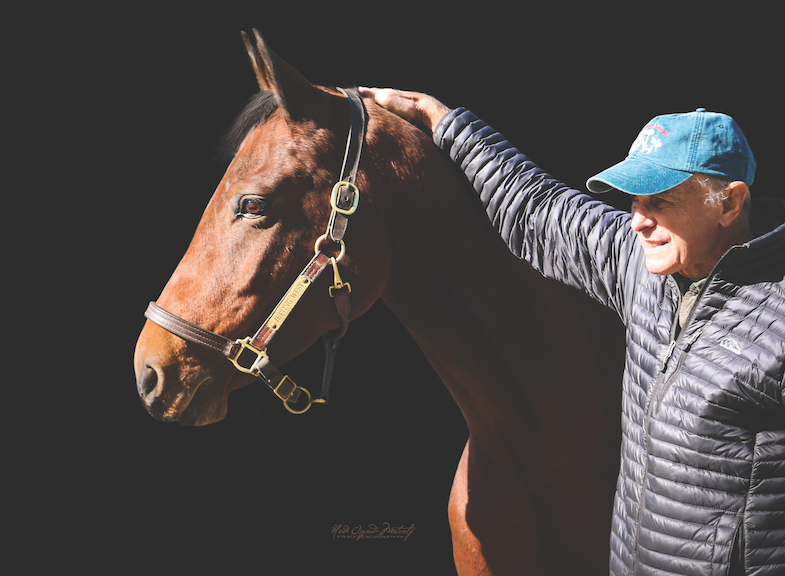 Denny posed with DRF All Eyes On Me, a Morgan. Photo by Heidi Osgood MetcalfThere is no doubt that Denny Emerson’s accomplishments in the saddle are legendary, but among Saddlebred lovers he may be even better known for a very different skill: his writing.

With its focus on horsemanship across all disciplines, Denny’s “Tamarack Hill Farm” Facebook page has become a destination for equestrians of all backgrounds, including many Saddlebred enthusiasts. However, while Saddlebred lovers “like” and “follow” the page, and regularly share his posts, many have little knowledge about the man himself, who is a highly accomplished equestrian in the sports of three-day eventing and endurance riding, and even shares a background in saddle seat riding. 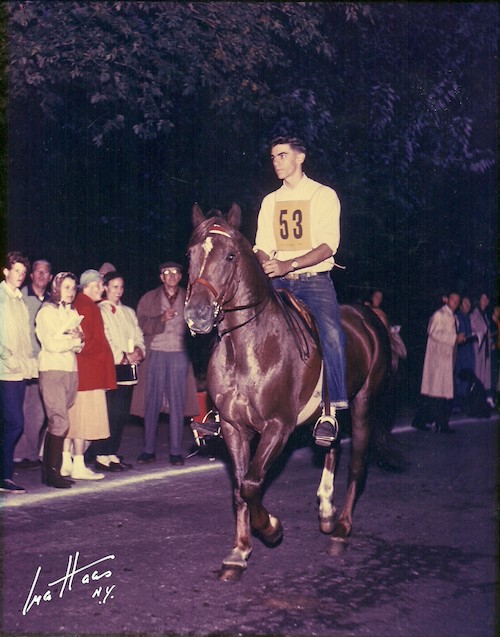 In 1957, Denny completed the GMHA 100-mile endurance ride aboard Lippitt Sandy, a Morgan. Today Denny, along with his wife May, run Tamarack Hill Farm in Strafford, Vermont and Southern Pines, N.C., but Denny’s equestrian career started much earlier when his father was named headmaster at the Stoneleigh-Prospect Hill boarding school, today called Stoneleigh-Burnham School, in Greenfield, Mass.

“We moved there when I was 9, and they did a mixture of saddle seat, hunt seat, whatever,” Denny said.

One of the best things about the school was that it was located just 23 miles up the road from Northampton, Mass., which at the time, was the location of The National Morgan show (now called New England Regional), and at 12 years old, Denny began attending the show to watch.

He got his first Morgan when he was 15, and saddle seat riding and showing was a big part of that experience.

“Everybody that I knew when I was a kid rode with a full bridle; we knew how to ride with two reins, two bits, and you had to have good hands,” he said.

As a teenager he even spent some time working for Robert Lippitt Knight at his Green Mountain Stock Farm in Randolph, Vermont – the home of the renowned Lippitt Morgans – before getting involved in eventing in his early 20s. His accomplishments since opening Tamarack Hill Farm in 1970 are too numerous to list, but a few of the highlights include being named the United States Evening Association’s Rider of the Year in 1972, helping to bring home a gold medal for the U.S. Eventing Team in 1974, and even earning a Tevis Cup buckle in 2004 for completing the 50th anniversary of the Western States Trail Ride, a 100-mile endurance race. With this honor Denny became the only rider to have won both a gold medal in eventing and a Tevis buckle in endurance. 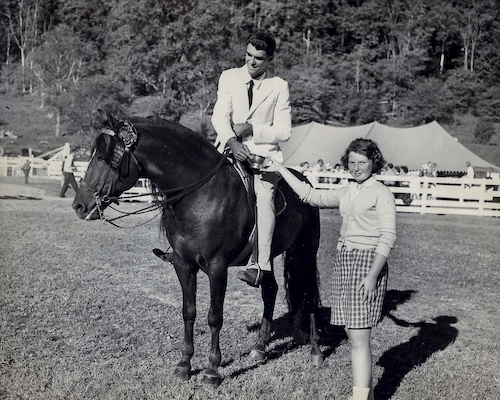 In 1959 Denny rode Lippitt Raymond to a blue ribbon in the English Pleasure division.

Because of his diverse background, Denny is much more open-minded about breeds and disciplines than many of his peers.

“I never had the prejudice that a lot of the hunt seat people had and have, I think,” he said. “There’s a lot of prejudice in the horse world, a lot of, ‘My way is the only way and your way is therefore wrong.’”

But Denny doesn’t think the disciplines are all that different.

“I think that a well-ridden saddle horse or Morgan who is balanced front and back is not so far away from a correctly ridden dressage horse as most people would think,” he said.

Of course, he admits, there are good and bad people in any industry.

“There are trainers who do it right and people who do it rough,” he said. “What I don’t like is the automatic assumption that some of these people make that if they see a horse going in a park frame with knee action there’s something wrong with that.”

While he isn’t entirely sure where this prejudice comes from, he suspects that it may stem from uneducated people confusing other saddle seat breeds with Tennessee Walkers. These are the type of misconceptions he tries to address in his writing.

Denny has been a regular contributor to “The Chronicle of the Horse” since 1989, has written the forwards to numerous equestrian books, and in 2011, published a book of his own, “How Good Riders Get Good.”

The Tamarack Hill Farm Facebook page began in 2009, and he was surprised at how quickly it took off.

“I started doing it, and I just found it interesting the kinds of things people responded to,” he said. “It’s sort of like doing a blog. Then I thought, ‘Maybe I can help some people coming along to avoid making the same mistakes everyone makes when they’re starting out.’ It’s interesting how it’s sort of developed a life of its own.”

Today the page has 96,646 likes and nearly 100,000 followers, which comes with a little pressure for Denny. 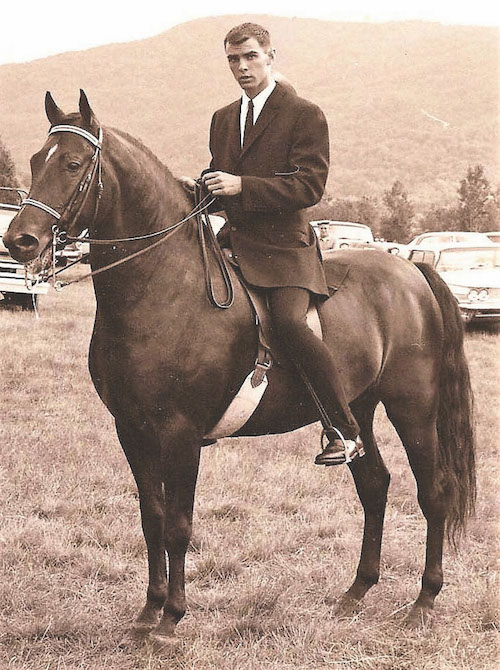 Denny posed in 1961 aboard Lippitt Tweedle Dee, a Morgan who was owned by Deane Davis, then Governor of Vermont. “It makes me feel like I have an obligation to try and do it right and say right things,” he said.

Of course, a page that popular also comes with a lot of comments. Denny reads most of them, but occasionally there’s an exception, like a recent post about Arabians that generated 1,300 comments.

While most comments are positive, every now and then a really negative one finds its way into the mix, but Denny has a method for dealing with those, too.

“If I get a really irate, angry one I just delete it or block them,” he said.

More than anything, he wishes people got along better and could see across the gaps separating breeds and disciplines.

“The greatest jumper rider of all time in America was William Steinkraus,” Denny said. “He won the Good Hands Finals in Madison Square Garden back in 1941.

He was known for having soft hands and he told me, ‘I think I got them from my early experience as a saddle seat rider, where you are riding with so much leverage that if you don’t have soft, elastic hands you’re going to mess up your horse.’”

“And it wasn’t rough on them,” he said. “I think you can have those long shanks and be rough, but you can be rough to a horse in any bit if your attitude is rough.”

When it comes to the saddle seat discipline, he believes that bits are just one of the things outsiders find disagreeable.

“I think that the perception that gets the Morgans and the Arabs and the Saddlebreds and the Hackneys in trouble is the sense that so much of it is what people would call artificial,” he said. “That if the horses were left to their own devices they would be calmer, quieter, wouldn’t have the knee action. That every Saddlebred or Hackney is living in a state of nervous tension.” 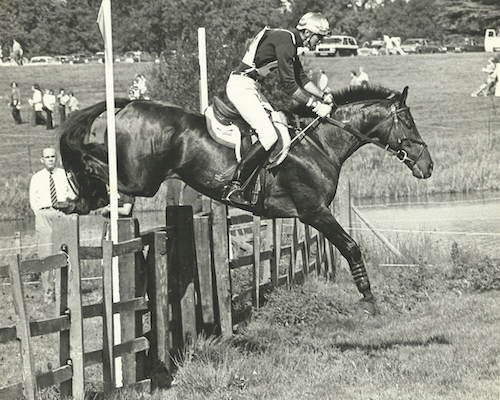 Viktor Dakin carried Denny to many high honors in eventing, including helping him bring home the team gold for the United States Eventing Team in 1974.He finds that there are other misconceptions, too.

“The thing that people don’t understand about Morgans and Saddlebreds and other breeds is they’re incredibly versatile,” he said. “Even if you took a park Morgan and took his shoes off and gave him a few months to decompress you could go win a 100-mile trail ride with that horse. I think the same thing is true with Saddlebreds. They’re just big, elastic, good-moving athletes. A horse will sort of do what you tell it to do. They don’t know what they are.”

While Denny has worked with numerous breeds throughout his career, including Thoroughbreds, Arabians and more, he was never too far from Morgans, and about 10 years ago returned to them in earnest. Today he owns 10 Morgans, and enjoys attending the Morgan Grand Nationals in Oklahoma.

“I like to go to Oklahoma and watch the park horses,” he said.

It was during his first trip to Oklahoma in 2018 that he met Stephen Kinney, editor of “The Morgan Horse” magazine.

“What I encountered that day was Denny’s open-minded interest in all forms of horsemanship, his appreciation of performances he was witnessing at the Morgan breed’s ultimate show ring event, and I listened as he mentally synthesized how it all fit into both the equestrian economy and Morgan history,” Stephen said. “He carries his observations to tens of thousands of Facebook followers and, as a result, the larger horse world hears regularly about the Morgan breed from a horseman they respect. As editor of ‘The Morgan Horse,’ I regularly reach out to him if I need a connection with Morgan history, advice on a tricky subject, or guidance down the path best traveled.”

Denny has numerous friends and connections in the Saddlebred world as well, including well-known instructor Gayle Lampe, who refers to him as a “horseman’s horseman.” He has also ridden a number of Saddlebreds – though never a five-gaited horse.

Though Denny believes there are others more closely involved who may be more qualified to comment, he does have a few observations and bits of advice to offer from his position on the fringes of the saddle horse industry. 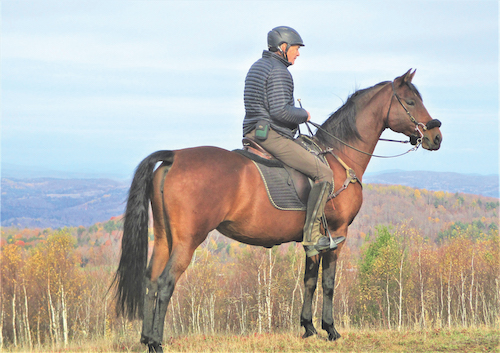 Denny took the Morgan Catch A Cloud for a ride.“For these breeds to survive you need that showing core, because that’s where the money is, but then around the edges to sure the breeds up, you need to say, ‘Okay we’ve got a park horse that doesn’t want to be one, we’ve got a horse that doesn’t have the zing to go present in the ring, what are alternate uses for Morgans and Saddlebreds and Hackneys that give these horses a safe landing?’”

And when it comes to professionals, he believes that it is equally important they remember that everything they do is a reflection of something greater than themselves.

“When you are a professional in the industry you owe it to your industry and your breed to do it carefully,” he said. “Everything you do is a reflection on you, but also on your industry and the type of horse, even if it isn’t the horse’s fault.”

At the end of the day, Denny believes that being a horseman and caring about equine welfare are really one and the same.

“Everybody has an obligation to do it ultimately with the horse’s well-being in mind,” he said. “That’s what being a horseman is. A good horseman or horsewoman is considerate for the wellbeing of the horse. We’ve got to put our money where our mouth is.”

By writing about these topics on his Facebook page and applying them in his barn, Denny continues to do just that.