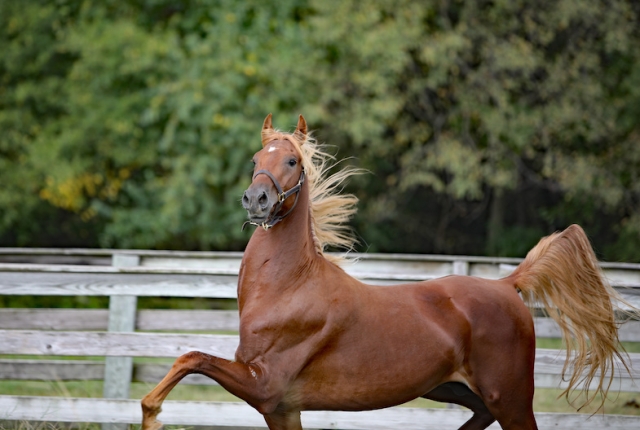 Most young stallions that begin a breeding career have already proven themselves in a performance career. Before entering into their new life in the breeding shed, these young horses will need some physical evaluations, re-training and some time to refocus on their new job and prepare for their first breeding season.

Dr. Peter Sheerin, owner of Nandi Veterinary Associates in New Freedom, Pa. (an equine practice with emphasis on reproduction), said that when preparing a young stallion for breeding one of the first considerations is insurance.

“If the owner is considering first-season infertility insurance, that needs to be done before anything else,” he said. “The insurance exam has to be done before semen is obtained from the horse, and is based on testicular size, a physical exam, etc. You don’t know what his semen is like, but obviously if he has decent-size testicles he should produce adequate semen. The insurance companies have enough information (on many stallions) to know that if the horse passes this type of exam, he will likely do fine.” 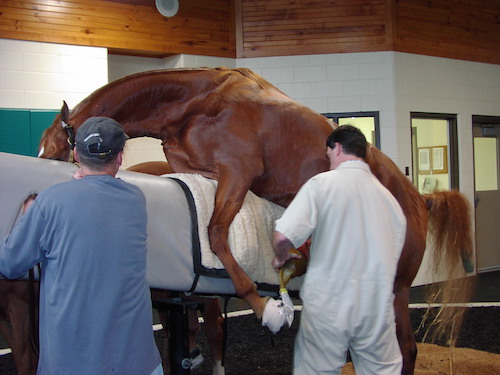 The horse will usually be tested for EVA (equine viral arteritis) and CEM (contagious equine metritis), which are both transmitted by breeding.

After the horse has had a chance to transition from performance and has had some turnout time, it’s time to start teaching him his new job. One of the main keys to success is a really good stallion handler. The handler walks a very fine line with discipline and safety, and needs to give that stallion as much leeway as possible, while still keeping him under control, with manners and respect for the mare and his handlers.

“If some of these horses get a little carried away and then get overtly corrected, you’ve taken a huge step backward,” Sheerin said.

It often takes multiple small, short sessions in the breeding shed, just because the horse’s patience, human patience, and attention spans, can be a tricky mix. If you try to do too much or go too far or too long, you end up taking steps backward.

“Everything you do should be in short intervals, and end on a positive note,” Sheerin said.

The first thing to do is to bring the stallion into the breeding shed without a mare there.

“Then he can see what the breeding shed is, and can get used to the new surroundings, and become comfortable with it,” Sheerin said.

Once he’s comfortable, then it’s time to start introducing him to some mares.

“You don’t want to try his first breeding with maiden mares,” Sheerin said.

You need a dependable, mellow mare that will be patient with a young or inexperienced stallion.

“This is the biggest challenge – with the horses that don’t pick it up quickly – when everyone is impatient and maybe wanting to use drugs to get him going,” Sheerin said. “You may have to introduce the stallion to multiple mares. He may have been disciplined enough in his life that it takes him a long time to figure out that it’s ok to have an erection or be loud around a mare. It’s okay for him to just be a stallion.”

You also need a mare that is in a good heat.

“This can be a challenge because a lot of the time we are working with a young stallion in the late fall or in the winter, when mares are not cycling,” Sheerin said.

Some farms have older, retired mares, and may treat them with estrogen to get them into heat, or they may have an ovariectomized mare that can be treated with estrogen.

“If mares are not cycling, you can treat them with exogenous hormones to get them to exhibit signs of heat,” Sheerin said. “Having a mare in natural heat is preferred over a mare that’s brought into heat with estradiol because the stallion can tell the difference.”

Teasing is important, and this also takes patience. In a natural environment, with a stallion and a mare turned loose together, they spend a lot of time teasing head to head. They are facing each other during teasing, whereas many people want to just take the stallion to the back of the mare and expect him to breed her.

That’s not the natural way for these horses to behave; left together on their own they have lots of interaction head-to-head.

“And then the mare is the one that decides she’s ready, and she’ll spin around and get into position to be bred,” Sheerin said.

For hand breeding, handlers have to mimic this to the best of their ability in the breeding shed in a controlled environment. Some facilities have a teasing bar or teasing wall so the stallion can tease the mare over the wall and you don’t have to worry about him getting tangled up with breeding hobbles, etc. As he progresses and becomes more comfortable with the situation then you can take the two of them out in the open to see how he breeds the mare.

In some situations the mare may be sedated, or have a front leg held up, or a twitch on her.

“A lot depends on the mare and the stallion, to make sure he doesn’t get scared by an uncooperative mare,” Sheerin said. “Then it’s just a matter of patiently letting him figure out what he needs to do. Many times the young stallion will get an erection and then not know what the next step is. He may just stand behind the mare with an erection. Sometimes what we’ll do in that situation is just back the stallion up a little bit and then walk him forward until he bumps his chest against the mare’s back end. This is often enough to motivate him to jump.” 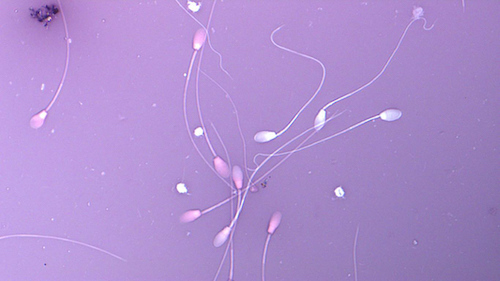 Then the next step is for the stallion to work on his aim. The first-time breeders don’t always have this figured out until they gain more experience.

“They may try to go sideways on the mare, or maybe a little cockeyed,” Sheerin said. “It’s a slow, patient process. If you rush up to some of these horses and grab their penis to help them, it may turn them off. You need a good crew that can work with the horse slowly and patiently, and give him the time he needs. The goal is multiple good experiences, and then the majority of young stallions figure it out.”

One of the problems he often hears about is that the stallion doesn’t show interest in the mare. You may need to try different mares, or may need to house him in a different situation where he is closer to some mares so that he gets some sexual stimulation. He’s led a very cloistered life, up until this point, and it may take him a little time to adjust to this new role.

“In most cases, it just takes time,” Sheerin said. “The time of year when you are starting with that horse will determine how much pressure there is on you to have him ready. If you are starting in the fall, you have plenty of time to keep at it, slowly but surely. But if you get that horse on the breeding farm in the middle of January and have to get him going by the middle of February or soon after, this will be more of a challenge.”

New breeding stallions should also undergo a breeding soundness exam and fertility evaluation. These are normally done at the same time, but because some stallions can be turned off by the collection process with the artificial vagina, Sheerin prefers to do these exams only after the stallion has become comfortable breeding a mare.

“If I have a preference, I would rather have him breed a mare a few times first, and be comfortable with that, before we try to collect him,” Sheerin said. “Then we perform the normal breeding soundness exam with two ejaculates an hour apart, measure his testicles, etc.”

Any issues that arise during or after the breeding soundness exam – whether behavior, or musculoskeletal issues or sperm issues (lack of numbers, too many defects or poor motility) – can be looked at more closely, though this may require a reproductive specialist who is well trained in stallion fertility and evaluation.

Sometimes people will take blood samples from the stallion and measure the various reproductive hormones, especially if he seems to have low libido and low testosterone. There may be a link there, but the levels may also be low because of the time of year you do this. Stallions are seasonal breeders, just like mares. Low hormone levels could also be due to treatment with a variety of different drugs during their performance career.

“What you see in the fall will be different from what you’ll see in the spring, but can give you a baseline,” Sheerin said.

Some people put their stallions under lights, as well as their mares.

“It doesn’t seem to make a big difference, but it does essentially the same thing as with a mare,” Sheerin said. “It may increase sperm numbers somewhat, and ejaculates will become a little more dilute. In the fall we tend to see a more concentrated ejaculate than we do in the spring, but total sperm numbers won’t have a lot of variation.”

If a new breeding stallion doesn’t seem that into his job yet, he may just need some time to catch on.