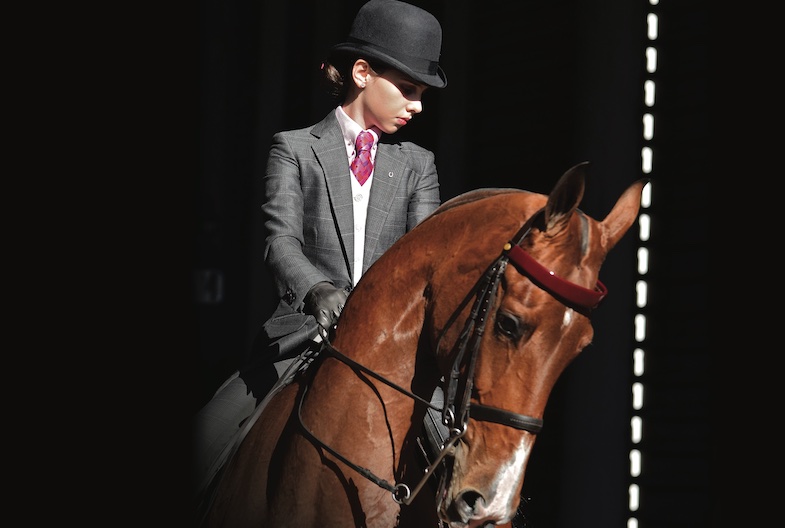 Photo by Allie Layos
"Do you jump?” “How was your race?” Those who ride saddle seat are all too familiar with these questions from well-meaning friends and family members, who don’t know much about horses, or the discipline of saddle seat.

Explaining saddle seat can be a struggle. It is true that saddle seat is a relatively rare type of riding, and you will not see saddle seat riders compete every four years at the Olympics. In fact, many people don’t even know it exists until someone introduces them to the sport. So what do you say when someone asks, “What is that?”

Most people who do not know much about horses know that there are two types of riding, English and Western. Although that is true, there are many sub-sections to both of these types. Saddle seat falls under the English category. Saddle seat began when horse breeders started acquiring high stepping horses; they realized that the current way they rode was not suitable for this new type of horse. 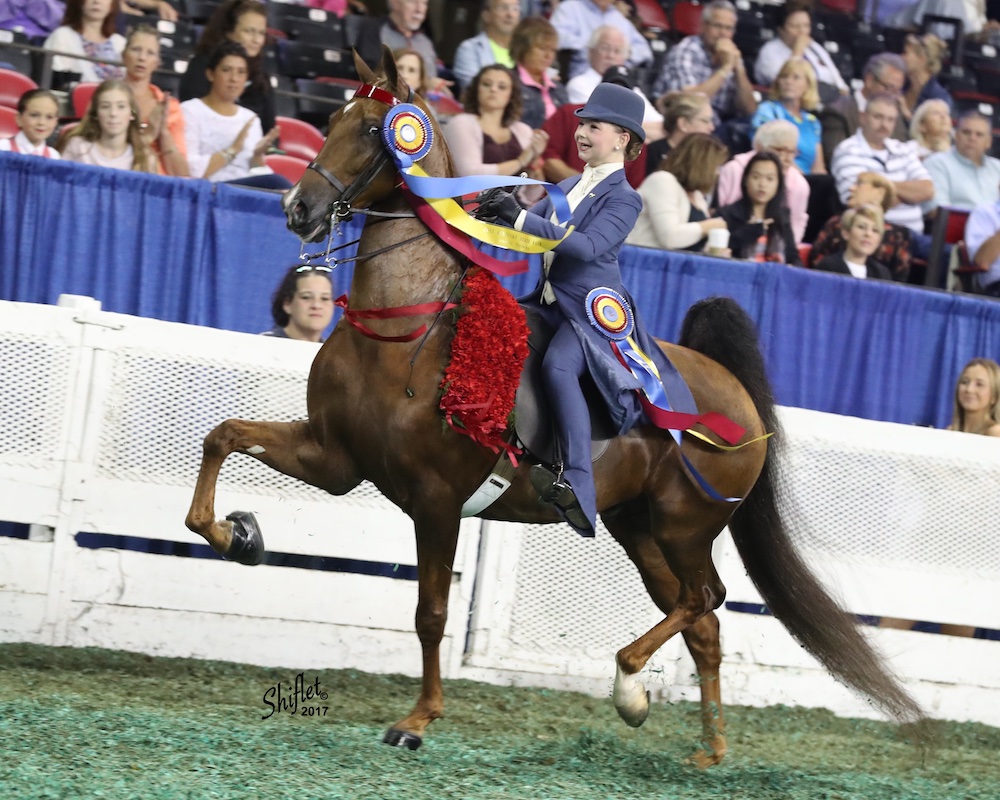 Isabelle Fischer demonstrates proper saddle seat position with her partner Blue Over You.They started by designing a new saddle. The cut-back saddle was designed with a four inch section cut from the front of the saddle. This left more room for the higher head and neck carriage and higher withers of these special horses, and allowed unrestricted movement of their forelegs and shoulders for their high-stepping gaits.

These new horses required the rider to hold their body in a new position as well. Instead of the hands staying low to the withers and posture tipped slightly forward, riders raised their hands up and sat straight and tall in order to match the horse’s natural way of going. The rider’s legs were aligned with the rider’s hip bone to drive the horse forward and give the correct cues. This is how the discipline of saddle seat equitation was formed.

Equitation is a word used to describe “the art of riding a horse.” The way an equitation rider holds his or her body is considered the optimal, or best, way to ride a saddle seat horse. Today many riders compete in the Equitation division to demonstrate their elegant style of riding and ability to performed complex patterns, or work outs. 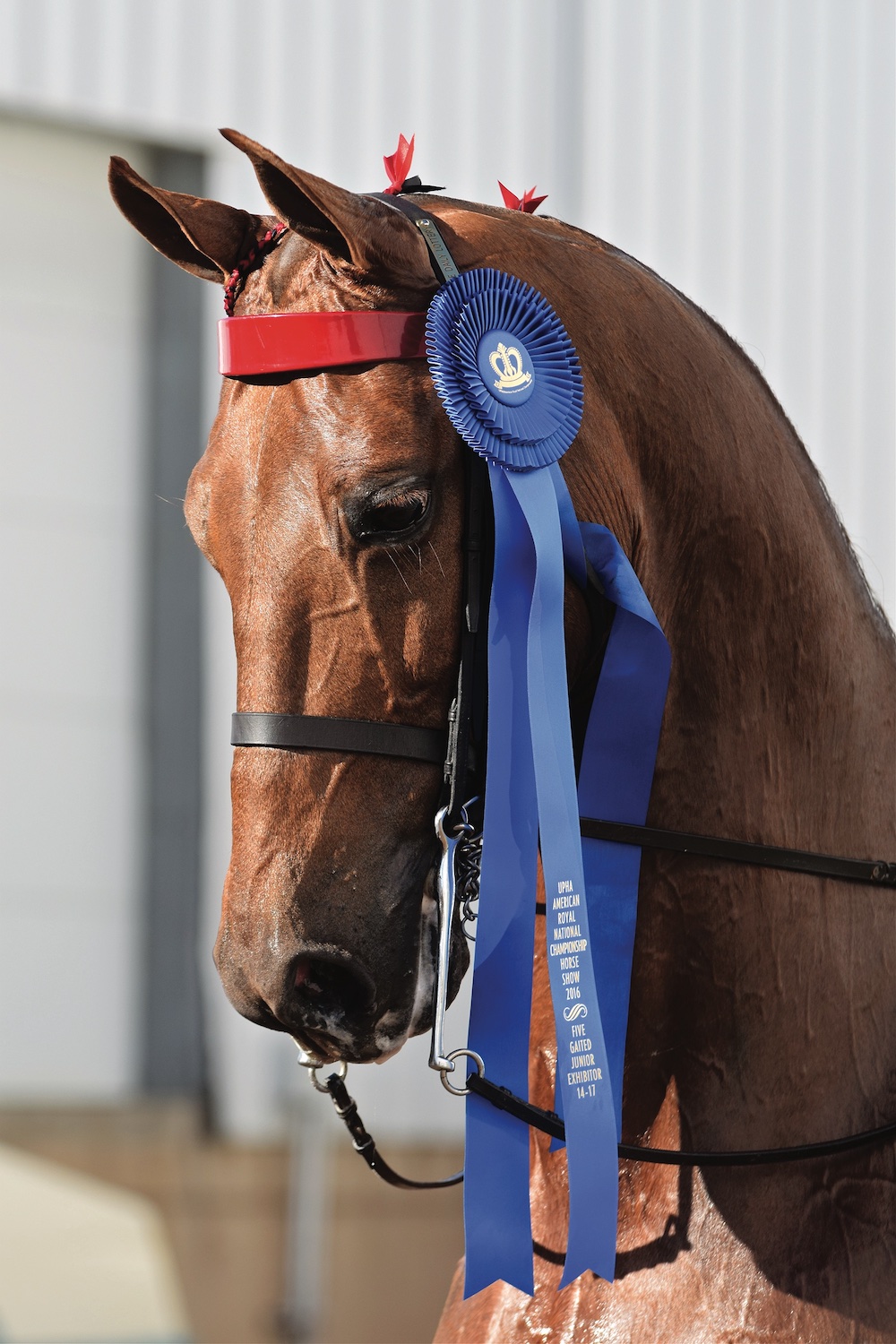 A typical saddle seat bridle.But equitation is only one of the disciplines in which saddle seat horses and their riders can compete. Five-gaited, three-gaited, park, fine harness, show pleasure and country pleasure are just a few of the classes for show horses that are held at dozens of shows throughout the year. In each of these classes, horses enter the ring and perform each of the required gaits both directions – first counterclockwise and then clockwise. There is never any jumping, and while some of the classes do encourage speed, it is never a race. How the judge picks the winner depends on the individual class.

Performance classes like five-gaited, three-gaited, park and fine harness judge a horse’s beauty, brilliance and animation in the show ring. These horses should be very exciting to watch! Other classes, like show and country pleasure, focus more on a horse’s manners, or how well it responds to signals from its rider. These beautiful horses must always be alert and responsive to what their rider is asking.

The discipline of saddle seat has a long and interesting history, and tradition still plays an important role in it today. But if you need to explain it simply, saddle seat riding is about connecting with your horse and asking him to do what he loves to do best – perform!