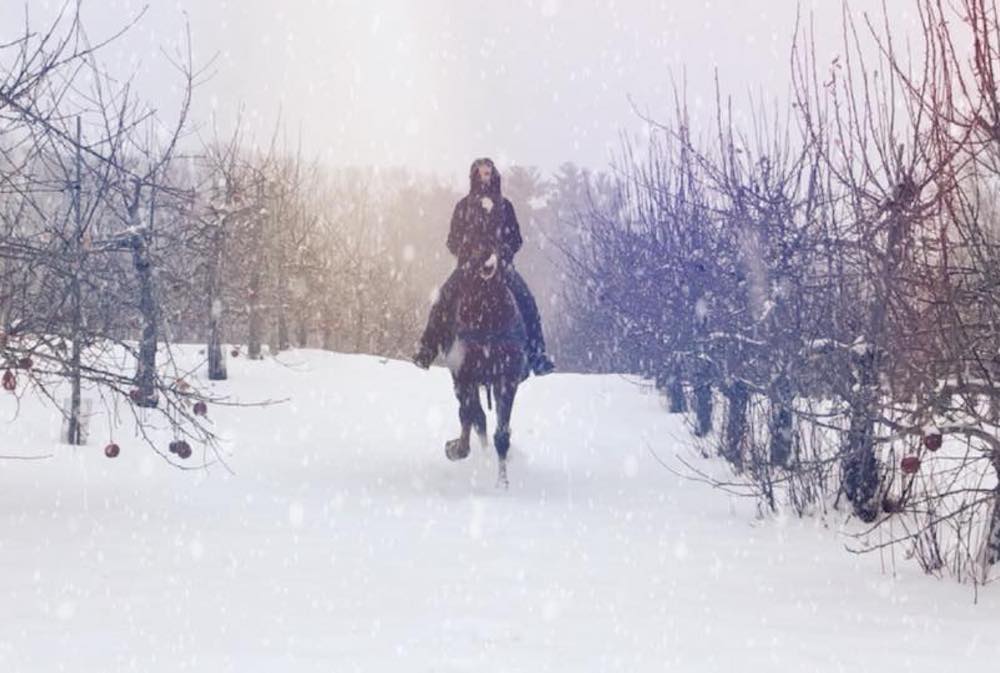 It falls from the sky, slowly drifting, in a roundabout pattern. If you could catch it under a microscope before it melted, you’d notice a unique crystalline structure. It’s the stuff of childlike whimsy, and only happens when temperatures drop below 32 degrees Fahrenheit. It’s that magical, mesmerizing form of water known as snow that delights children of all ages, and horses, too.

Since horses work tirelessly throughout show season, during the winter most owners and trainers like to change up their horses’ routines by providing some downtime. This is most often accomplished through the use of turnout, but the one thing that will truly light up their eyes is being allowed to play in the snow.

The idea that a 1,200-pound creature that can be scared of anything from a butterfly to its own shadow enjoys snowy weather is perplexing, but there’s something about this cold, fluffy substance that brings out the inner foal in horses, inspiring them to frolic, buck, romp, run and play, kicking up white flakes in their wake.

“Horses love the snow,” Sunrise Stables owner and trainer Melissa Moore said. “I don’t know what it is about it, but they love to play like a little kid in it.” 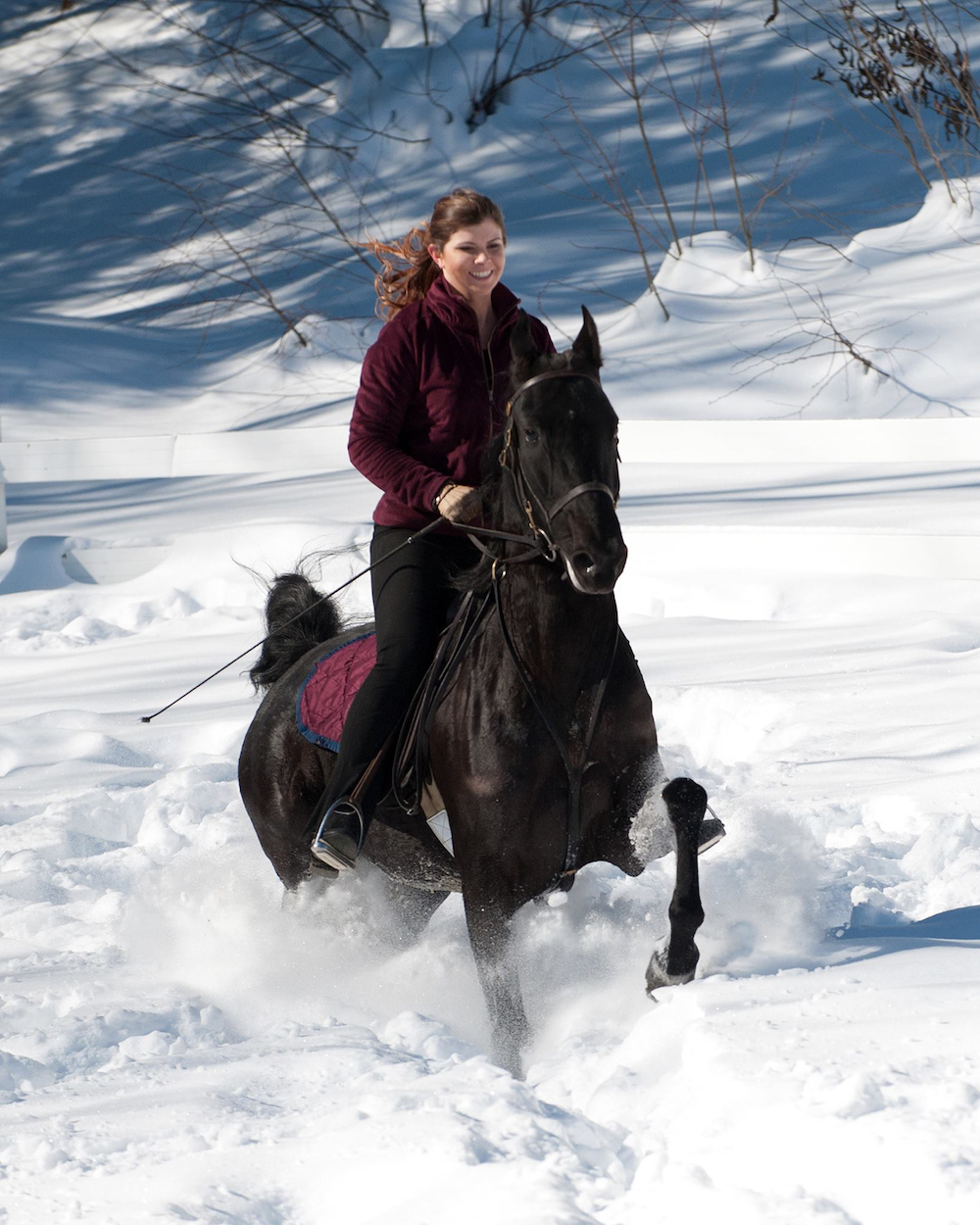 “Not every horse is going to let you canter through the snow pulling a sled,” Melissa said. “It has to be a special horse… they have to be broke to drive and ride.”

Jillian Tsiplakis has enjoyed many frigid winters by playing with her horses in the snow. “I’ve always been into vacationing my horses in the winter,” Jillian said. “I think it’s really important with a show horse, to give them the time off.”

Jillian’s mare, Very Scary, also known as Buffy, is small – just 15 hands – but she can keep up with Saddlebreds that are much larger. Her talent, and sweet disposition, is just one of the reasons why Jillian hopes to breed her in the spring.

Buffy and Jillian train with Jon Douglas at Wildwood Farm in Connecticut, and then in the winter, Buffy enjoys some time off at Judy Nason’s Bellewether Stables in New Hampshire.

Once competition season is over, the show shoes come off. Buffy is equipped with shoes that have borium on them to improve traction and give her better grip during the winter months when the ground is hard and the snow and ice are slippery.

“I only ride in areas I’m familiar with,” Jillian said, “and walk every inch of a field first. I know where I’m riding, and if you’re careful doing it, you can have a lot of fun.”

Before Jillian and Buffy venture out for a snowy adventure, Jillian makes sure Buffy is stretched and warmed up. She will take Buffy through a stretching routine that lasts about five minutes to warm up Buffy’s muscles before walking, which is especially important, she stressed, because of the cold weather. Then, Buffy gets strapped up with a breast collar, just as though she was pulling a cart.

Because almost all Saddlebreds are taught to pull a cart, pulling sleds, or a skier, isn’t completely unfamiliar to them, making them ideal for winter activities. 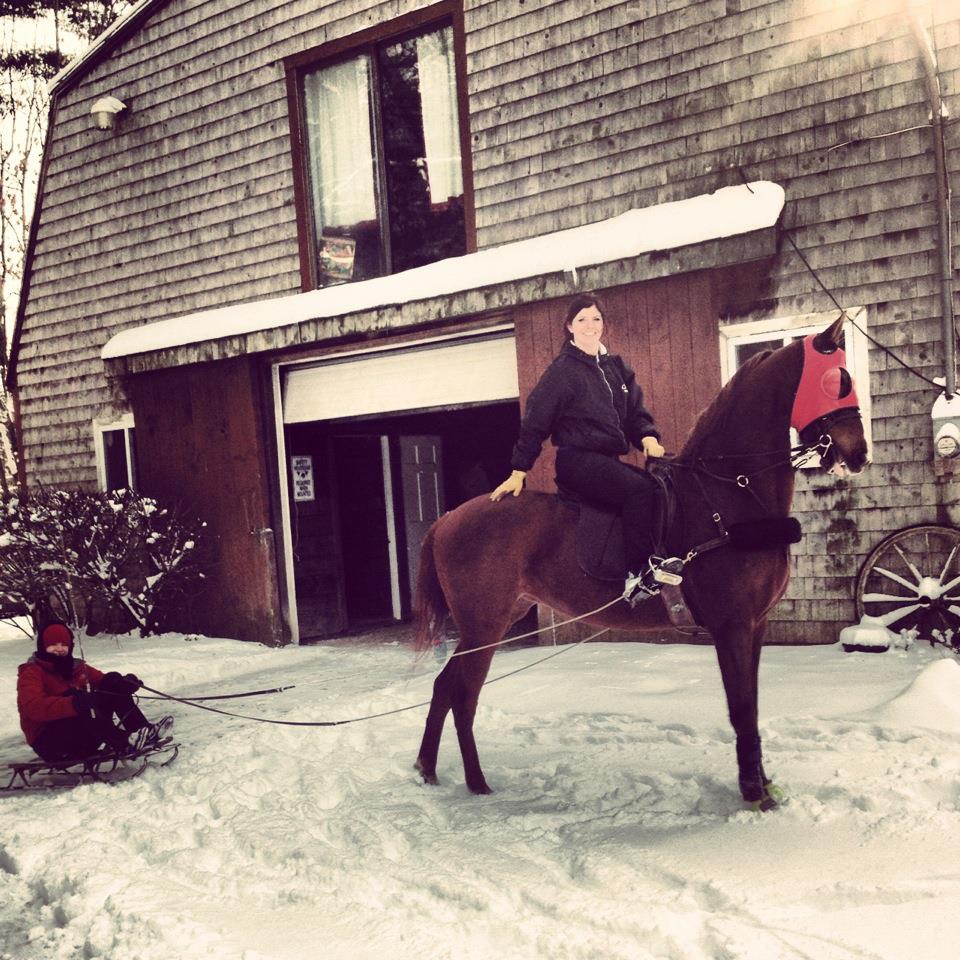 For sledding, Jillian said, she always has someone on the horse. For skiing, you can have someone else riding, or you can attach long lines to the horse and venture out. Because the skier is standing, it is possible to direct the horse.

“We have a blast,” Jillian said. “I have a great group of friends who want to do a lot with their horses as well, so they’re always down for any fun, crazy thing we have planned for the day.”

In December, Jillian brings Buffy to a local Christmas parade that has more than 10,000 spectators.

“Buffy loves parades,” Jillian said. “She thinks it’s a race, so she tries to walk the fastest. She thinks it’s really fun. Last year, we were right behind the band and she thought it was like a horse show with the organ player. She was marching all proudly.”

Sometimes snowy winter fun can be combined with breed promotion. At the parade Jillian passed out more than 2,000 cards providing information about the Saddlebred breed, and enjoyed letting people meet Buffy. Many of them, she said, had never seen a horse up close before, and noted that Buffy seemed to be having a great time enjoying the music.

While some breeds might scoff at the idea of playing in the snow and exploring the unknown, Saddlebreds like Buffy embrace winter activities.

“She’s talented, smart and does everything I ask of her,” Jillian said.

The key is having a trusting relationship with your horse and making the winter activities fun and exciting. This winter, Jillian will be teaching Buffy how to play soccer with a friend’s horse. Jumping is also a favorite pastime.

“Buffy loves to jump in the winter because it’s not something she does during the show season,” Jillian said. “She knows the difference between show season and her off season.”

Jillian notices that when Buffy isn’t in training for the show ring, she’s often calmer, and that makes winter a prime time to expose her to clinics and different things.

“I try to treat my horse like an athlete, and not like a machine that just goes around the ring,” she said. “It’s important to them to have their off time and also their cross training working different muscles on them. It’s something we really try to focus on in the winter.” 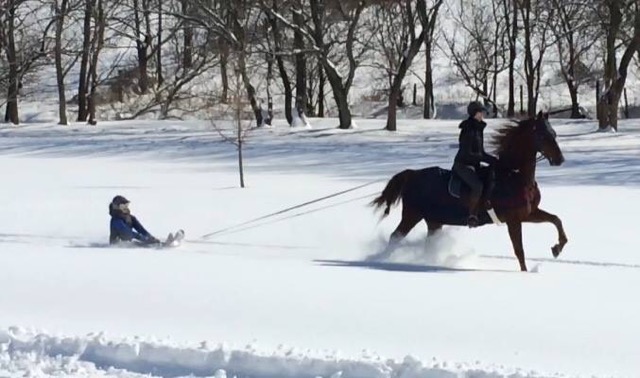 A former high school athlete herself, Jillian wants to make sure that Buffy doesn’t ever feel burnt out; by focusing on different muscle groups through walking and trotting in high snow, Buffy is able to get stronger in a fun and exciting way. Buffy is given the opportunity to explore the well-groomed walking trails at Bellewether Stables, but for those without pristine trails available, Jillian said, indoor riding rings and gravel driveways, places that are well-groomed, nice and safe, are also perfect for skiing and sledding with your horse. Lessons in the snow also add an element of change.

“It’s a good time to work out any problems,” Jillian said, “because if you fall off, the snow doesn’t hurt as much.”

Winter is also a great time to allow your horse to really show its personality. When Jillian took Buffy on her first trail ride, she instinctively led the pack and was jumping over obstacles, trekking through mud and water and being a brave mare. Everyone along on the ride noted that she was very pretty and brave, Jillian said, and by taking Buffy out in a different environment, it allowed others to see that the distinctive Saddlebred sharp eye and high head doesn’t mean they’re afraid, but rather that the look is natural and what the horses are supposed to look like.

“Breed promotion is so important to me,” Jillian said.

If you aren’t interested in playing in the snow yourself, there are many great indoor activities you can enjoy with your horse in the winter. Or, you can sit back with a warm blanket and some cocoa and take photos to share online of your horse frolicking in the snow and enjoying the novelty of crystals that are just as special, beautiful and unique as your horse is.

For Melissa, any time there is snow is a good time for her horses.

“They mostly love to run and play and buck and have a good time,” she said. “They absolutely love to play in the snow."