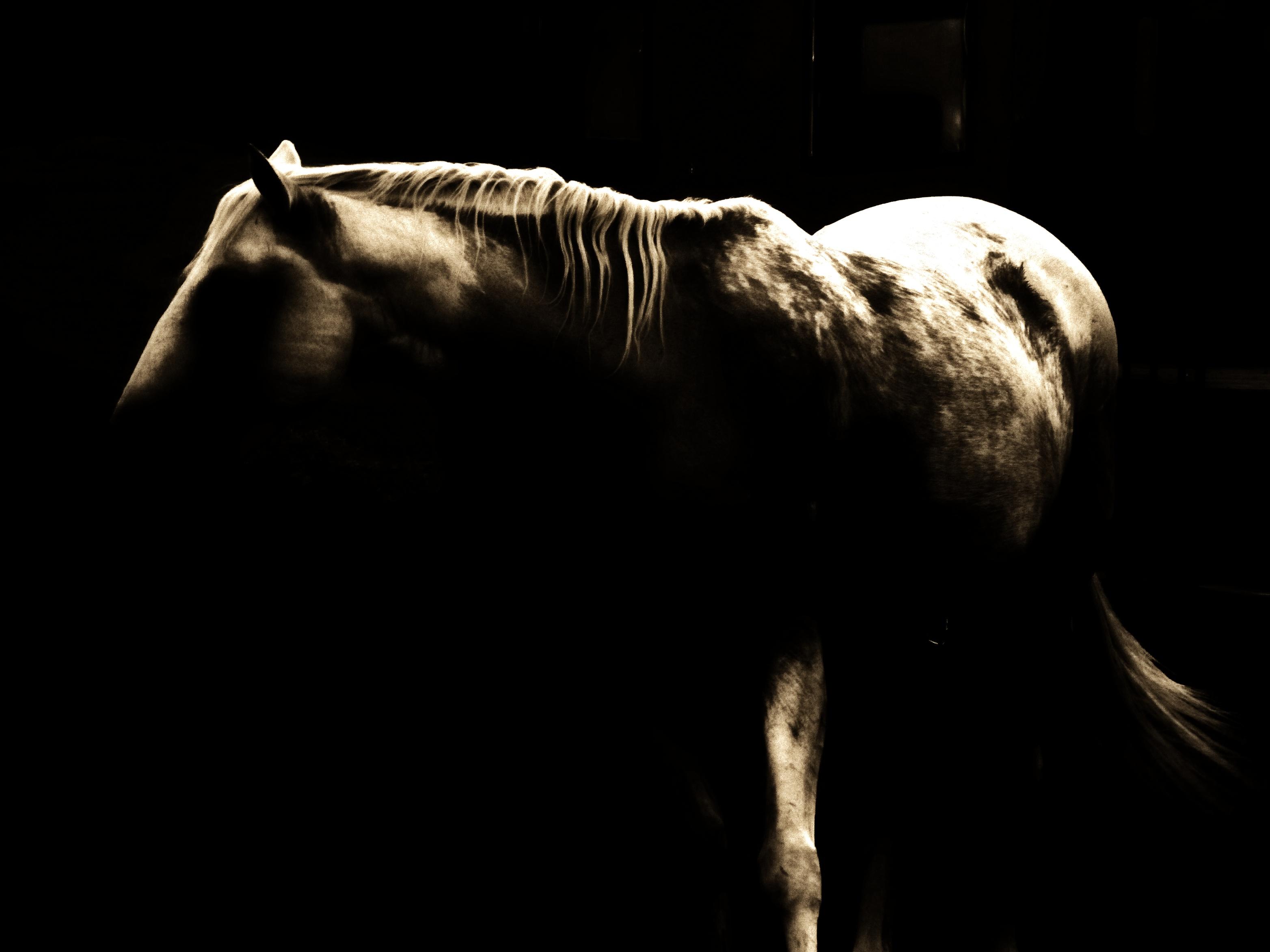 Spring in the Saddlebred world usually means a few practice shows under everyone’s belt, with riders and trainers anticipating the larger shows of the mid and late summer. This year, however, with the entry of equine herpesvirus myeloencephalopathy (EHM) into the Saddlebred community, show season has taken a different turn.

EHM is a form of equine herpesvirus 1 (EHV-1) that is characterized by neurological disease. Both the mutated and non-mutated form of EHV-1 can cause EHM, but the mutated form is generally believed to do so more often, and has seen an alarming increase in recent years. In just a few short weeks it has terrified owners, cancelled horse shows, and brought about the death of a handful of excellent and beloved horses; it is a potentially deadly disease with no real vaccine and no real cure. However, as scary as EHM may be, there are precautions that can be taken to minimize your horse’s risk of infection, and a better understanding of the disease may go a long way in keeping show horses safe.

There are nine types of EHV, with types 1, 3 and 4 posing the greatest health risk to horses. Nearly all horses throughout the world become infected with EHV-1 at an early age, often through contact with their dam. In most instances, however, the virus becomes latent, or inactive, in the horse’s body. In other words, almost every horse in the world is walking around with EHV-1 right now, but it isn’t a problem unless the virus happens to be reactivated, usually during times of severe stress.

EHV-1 and 4 are also known as Rhinopneumonitis, but, while the Rhino vaccine is on most horses’ spring and fall vaccination schedules, it does not prevent EHM. Instead, the most effective prevention is through stable management practices. Since the virus is spread via the respiratory tract through nasal secretions – a process known as “shedding” – it can be transmitted in a variety of ways: through horse-to-horse contact, through contaminated objects or people, and even through the air, though how effectively it can spread this way under normal environmental conditions is under debate.

While horse-to-horse contact is the most effective method of transmission, all a horse has to do in order to spread the virus is cough, sneeze or rub its nose on an object or person. If the object or person then comes in contact with another horse, the virus can be easily transmitted, as it typically lives outside the horse’s body for 7 days, and, in rare cases of perfect environmental conditions, can remain alive for up to a month. Though it has been a concern for some horse owners, it would be highly unlikely for a horse to contract the virus through someone tracking manure from an infected horse into another horse’s stall. Instead, shared towels, bits, feed tubs and similar items are much more likely culprits.

If a horse does get infected, the incubation period for EHV can be as short as 24 hours or as long as 14 days, but is generally somewhere in between, with the neurological form typically falling somewhere around 8-12 days.

According to Dr. Paul Schiltz of Equine Medical Services in Columbia, Missouri, there are a number of factors that affect the incubation period.

“It depends on the level of exposure and strain of virus that the horse is exposed to,” he said.

Early symptoms of EHV-1 include a runny nose, lethargy, fever and a horse being off its feed. However, for horses with EHM, fever is often the only early symptom. When the neurological signs begin they are usually sudden and progress rapidly, with head tilting, urine dribbling, incoordination and eventually a horse that is unable to stand.

The virus can be diagnosed with a nasal swab or blood tests, though tests as a precautionary measure will not be one hundred percent effective; a horse that was just exposed may not test positive for the virus right away.

“If you tested every horse that was being bought or sold you would probably catch some here and there but you would not catch them all,” Schiltz said. “In the future tests may become more reliable and be able to pick up a smaller infection at an earlier time frame.”

There is no cure for the disease, so supportive care is in order for a horse that contracts the virus. This means attending to all of the horse’s needs, from the obvious ones such as feed and water, to assistance rising, urinating and defecating, as well as treating them for any secondary problems such as urinary tract infections or colic.

Dr. Steve Reed of Rood & Riddle Equine Hospital in Lexington, Kentucky, is one of the world’s leading experts on neurological diseases in horses. It is the inability to rise and the complications that flow from it that can cause the death or prompt the euthanasia of horses, he said, however, vasculitis, or “stroke-like” symptoms due to primary loss of neurological function, are another leading cause of death.

“Most that die are usually suffering, and humane considerations are critical,” he said.

However, death from EHM is not as common as some may think. The majority of horses that contract the disease recover, though it may not be to their full capacity. Reed assisted in an outbreak where 117 horses out of 135 developed a fever and other signs of EHV-1 infection. Of those 117, 46 developed neurological signs, and approximately 12 were euthanized.

“That would be about 10% that died, which is a high number – usually fewer die, though it can be a devastating disease,” he said.

Of the recovered horses on that farm, some had residual signs six months later, but they were able to return to competition. This is a silver lining of what can be a terrible disease – if a horse completely recovers, they are just as safe as any other horse.

“Once recovered and no longer shedding the virus they are not going to be a source of the spread,” Reed said.

However, it is important to remember that herpesviruses, by their nature, cause latent infection. Just like any other horse that was previously infected with EHV-1 early or late in life, the recovered neurological case will be a latent carrier of the virus, and has the potential to begin shedding again during periods of stress.

Though there is no vaccine proven to prevent EHM, many horse owners turn to vaccinations anyway. There are different schools of thought as to the best method of vaccination. Some vets use a standard killed Rhino flu virus, to stimulate the horse’s immune system, in the hopes that they will be better able to take on the challenge if they do get exposed. Others recommend vaccinating with a modified live virus. Research indicates that this may have low levels of protection, but is certainly not one hundred percent effective. Finally, others recommend using immuno stimulants, to increase general immune response.

However, while vets may not agree on the method of vaccination, they do agree that if you are going to vaccinate, you should only do so before your horse has been exposed to the virus, as doing so after exposure seems to have adverse side effects.

Limiting your horse’s contact with outside horses is still the most effective prevention measure, but it may not always be practical. If you must take your horse to places that are or have been populated by unfamiliar horses, such as horse show stalls or trailers, you can lessen the chances of exposure by thoroughly cleaning the area ahead of time. Other good news is that conventional detergents and disinfectants can kill the virus in the environment; it is recommended to scrub with soap and water and then disinfect the area.

During an outbreak, it is also important to monitor the visitors to your farm. If customers, farriers or vets come from other barns or have handled other horses, you may want to ask them to wash their hands and change clothes before arriving at your property, even if they are not coming from a farm that has experienced a case of EHM.

A standard 21-day quarantine is recommended for any new horses arriving during times of outbreak. It should be noted that a horse on the other side of the barn is not an effective quarantine, even if there are no horses in the adjoining stalls. If at all possible, the horse should be kept in a completely separate building. Regardless, you should monitor the new horse’s temperature during this time. A temperature of 101.5 degrees or greater is cause for alarm and warrants a blood test. And, as in any case of suspected and transmittable illness in a horse, you should work with the quarantined horse last in your daily routine to prevent possible infection in other horses.

The larger question, perhaps, is what to do about show season. While most people are in agreement that the health and safety of their horses should come first, what does that look like in practice? Reed believes that it does not necessarily mean all shows should be cancelled or exhibitors should stop attending them.

“If you have had proper time to clean and disinfect, then there is likely little need to cancel,” he said.

Since the recent outbreak, the managements of several Saddlebred shows are choosing to clean and disinfect their facilities for the exhibitors. However, it is when there is not sufficient time for this or when shows are so close together that the details of an outbreak are not yet known, that Reed believes canceling may be the right choice.

Reed also believes that requiring proof of EHV-1 vaccination for competition may help minimize the risk of horses transmitting EHM to each other at shows, as it will limit the nasal shedding that allows easy transmission of the virus from one horse to another.

“Each individual going to a show only knows the health and hygiene used by themselves and a few others, so having regulations may increase everyone's awareness about infectious diseases, and that is good,” Reed said.

While there is a school of thought that EHV-1 vaccinations may actually make the virus mutation more likely, and, alternatively, some unverified research that EHV-1 vaccination may help prevent virus mutation, there is no real evidence to support either claim, said Udeni Balasuriya, Ph.D., professor of virology at the University of Kentucky’s Maxwell H. Gluck Equine Research Center. In fact, Balasuriya’s research has led him to believe that the link between virus mutation and EHM is weaker than many think.

“I am not a strong believer that the mutation is causing the neurologic disease,” he said.

This is just one example of the many unknowns that remain about EHM, but Dr. Reed believes that the future may hold some answers. While there isn’t yet a vaccine to truly prevent it, he remains hopeful.

“This may change,” he said. “And that may happen soon.”