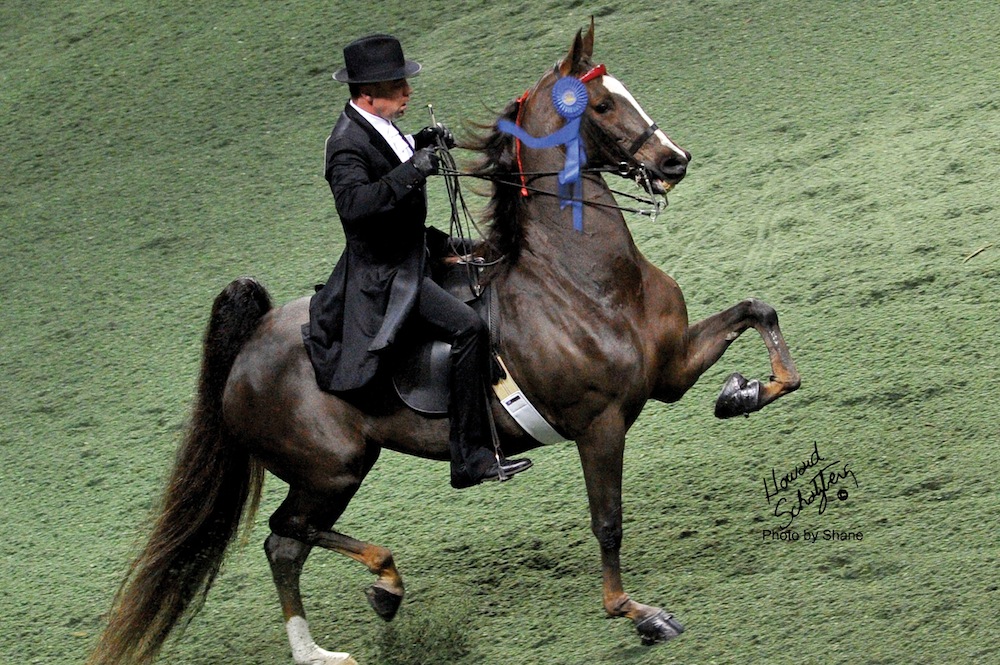 Robert Gardiner showing Callaway's Blaire as a park horse.What is a park horse? If you ask this question of the three-gaited, five-gaited or fine harness horse, the answers are concrete. Five-gaited horses, known for their slow-gait and rack, are powerful and exciting, with energy that is channeled into forward motion. Three-gaited horses are known for their elegance, refinement and energy that is channeled into animation. Throw a mane on that horse and hook it to a viceroy and you have yourself a fine harness horse.

But where, then, does the park horse fit? Are they three-gaited horses with manes? Are they five-gaited horses that don’t rack? The modern-day park horse, it turns out, is neither of these things, and is not a “throwaway,” either. In fact, this unique, vaguely defined and fast-growing division is gaining followers with each passing day, and becoming home to horses that are exciting, powerful, and extraordinarily talented.

A division for misfits

“They were horses that trotted high but didn’t have the fine neck to be a walk/trot horse, or pleasure horses that didn’t walk so you showed them that way, or gaited horses that quit racking that weren’t pretty enough to trim,” trainer Robert Gardiner said.

Like all trainers, Robert has placed horses in the park division for various reasons – it made a great home for a pleasure driving horse that refused to stand in the lineup with blinkers, or a horse that wouldn’t consistently flat walk – but today most people believe that the division is about more than compensating for equine quirks … they just can’t pinpoint exactly how.

Even the United States Equestrian Federation Rule Book, the go-to descriptor for Saddlebred divisions, gives a minimal description of the park horse. The fine harness horse is described in approximately 690 words, the three-gaited horse in about 620, and the five-gaited horse in about 550. Comparatively, only about 520 words are dedicated to the park horse, and the majority of those words are spent describing not the ideal park horse, but the rules and class specifications. Shows today may offer classes for horses with a roached mane and tail or the much more common full mane and tail, and tails may be either set or natural. In addition to the common Three-Gaited Park, ASR Two-Year-Old Sweepstakes and ASR National Three-Year-Old Futurity, the rules even allow for the less common Five-Gaited Park and Fine Harness Park classes. And, as in most performance divisions, classes can be divided by the size of the horse (over or under 15.2 hands), the sex of the horse or rider, or by rider age.

But despite its catch-all status, Robert believes that there are a few obvious qualities that are shared among all top park horses today. First on this list is a ground-covering trot.

“The first year I worked here in Missouri I had two horses I showed in park, Red Hot Kid and Callaway’s Blaire,” Robert said. “Red Hot Kid we bought as project horse to put in whatever division he made it in. Blaire had been a gaited horse and I couldn’t quite get her sound enough to rack. They were both fourth at Louisville and when I reflected that winter I felt that I was riding both of them too fast for their form, and their frame wasn’t as good as it should’ve been. Because those classes are so large you need more of a trot than a park trot if you want to get seen. I trimmed both of them the next year and they moved up a ribbon and both got third.”

This experience taught Robert that a park horse trot should fall somewhere between that of a five-gaited horse and a three-gaited horse, and that the horse needs to be able to get off the rail and get seen without losing its form.

“You’ve got to have a horse that is able to do a little more of a ground covering trot than a park trot, unless you have some kind of freak – and if you have that you ought to be in the three-gaited division,” Robert said.

“I’m relatively young, so it’s always been a part of what I’ve known as a professional,” Mary said of the park division. “But I’ve been very involved in the juvenile park because that was so new. That’s something that, in the Carolinas, they have been very pro-active in helping along.”

At High Caliber, she and her riders have a saying that there are two kinds of park horses, “power park” and “pretty park,” and Mary has had both.

“We had CH-EQ Reedann’s Heir To Glory who is now a wonderful equitation horse, and we would call him more of a ‘pretty park,’” she said. “Then you have a horse like CH Let’s Talk, who we would call the ‘power park,’ because he is more powerful and bold.” 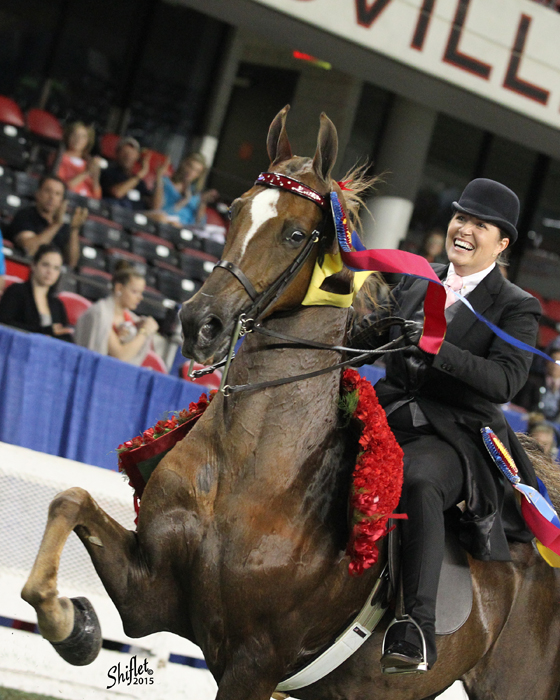 Mary Orr being named the Park World's Champion Of Champions with CH Let's Talk in 2015.Though she loves a pretty horse, Mary agrees that the ultimate park horse should be strong and ground covering.

“If you asked me the true definition of a park horse, I think of a more powerful horse that is a little less elegant, that kind of grabs hold of the ground and is incredibly aggressive,” Mary said. “I want to see them be athletic.”

But according to the USEF Rule Book, park horses also have to be well mannered. Manners are listed as a requirement in the division’s general description and in each of the individual class descriptions, though there are no percentages to illustrate how much weight they should hold. Still, despite this ambiguity, or maybe even because of it, the division has grown to hold a great deal of value.

“The park division has great value in the sense that it gives trainers a place to put horses that don’t quite fit the traditional divisions,” Robert said. “It widens the array of where you can show horses and that’s a good thing because not every horse is good at everything.”

“I don’t think it’s a throwaway division at all, I think it’s another great place to display the American Saddlebred,” Mary said, alluding specifically of CH Let’s Talk, who competed very successfully in the three-gaited division before he came to High Caliber, even winning the Three-Gaited Over 15.2 class at Louisville in 2010.

“I liked him as a walk/trot horse, but he’s really made a home in the park division,” she said. “It’s just another opportunity to kind of catch great horses that maybe aren’t quite this or that, but still have a lot of room to be great horses in the show ring. It’s a great place to display quality animals that don’t quite fit a different division.”

The inclusive nature of the division may be one reason that it continues to grow. In fact, for junior exhibitors and amateurs, it is often one of the largest classes of a show. Sometimes it’s even the most exciting.

“I remember very distinctly some of the most exciting classes at Louisville being the park championships,” Robert said. “I remember one year everybody standing around thought that it should be on Saturday night it was so good.”

The somewhat vague element of the park division adds value in other ways, too: it makes it a great class for those who are horse shopping.

“One person’s park horse might be someone’s something else,” Robert said. “I think sometimes buyers look at this division and think, ‘maybe I could do something different with one of those horses,’ kind of like what you do when you look at the fine harness class.”

For these reasons and more, Robert believes that most trainers and exhibitors today appreciate the park division.

“I think the people newer to the breed accept it as a regular division, and I think trainers and people who have been around a long time as owners still see it as a hybrid, but that just changes with time,” Robert said. “I don’t think anyone looks at it negatively because it does have a value in a sense that there are blue ribbons to be won. Any time you have a division and horses can win in it, it’s worth money.”

Still, he doesn’t think most people would go out intending to shop specifically for a park horse.

“It’s not a division people typically shop for unless the horse is already established in that division,” Robert said. “I can’t imagine a customer saying, ‘I have $200,000 let’s go buy the best park horse we can buy.’ It’s still a generation away from people being used to it.”

Though Mary agrees that this is true for most barns, especially among barns with older trainers and owners, things are a bit different at High Caliber, which is extremely amateur and juvenile-based.

In fact, it is the large numbers in the park classes – not a “misfit division” stereotype – that holds most people back from trying it. (“In three-gaited you have ladies, amateur, ladies amateur and so on,” Mary said. “But that park class … it’s called amateur.”)

However, while Mary and her customers definitely shop for park horses, she doesn’t yet know anyone who specifically tries to breed for them.

“I don’t think it’s gotten to the level where people say, ‘oh, let’s breed a park horse,’” she said.

But that day may not be far off, as she has already seen the division make great strides during her time as a professional.

“As with anything, when things start out people are kind of critical of it, but it’s one of those divisions that’s proven itself,” Mary said. “I think that every year it goes it gains more respect.”

Because of this, she is excited for the future of the park division.

“I think its’ a great place to put people and horses, and I see it only getting bigger and better,” Mary said. “I hope it continues to evolve to the point of someone specifically wanting a park horse.”