Gidget was always breaking my heart. In 2009, after joining the Army, I used my military sign on bonus to buy Gidget. I was 22 years old and Gidget was only 3; I guess I thought we could figure out this “growing up” thing together. 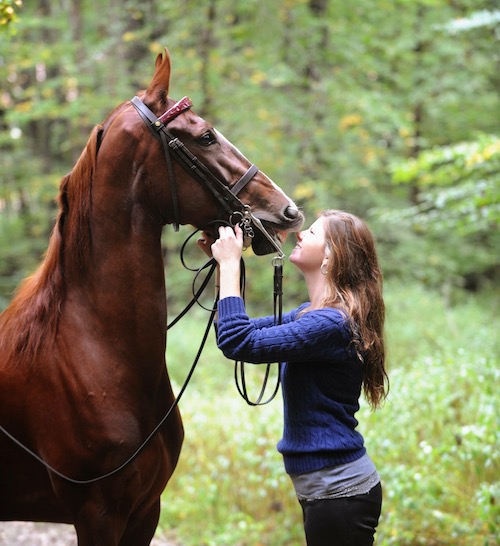 Gidget and I immediately after my return home from Afghanistan.I was in awe the first time that I saw her. She was stunning! The first day I spent with her, I groomed her, loved on her ... and clipped her. After finishing her first ear with zero issues, I thought to myself, "Wow, what a nice pleasant horse, standing so well to get clipped!" Suddenly my entire arm was in her mouth as she decided she no longer wanted her ears clipped and was going to amputate my arm herself to ensure I would never clip her again! I still have a scar from her amputation attempt and of course my heart was broken. However, for years after she never gave me another issue with the clippers.

After bonding with her, and sending her to a trainer to get her finished for me to show, I was deployed to Afghanistan in 2010. Gidget spent the year in California while I spent the year in a war zone. Broken heart again.

After returning from Afghanistan I decided to move back home to my family in Massachusetts. I shipped Gidget from California to Massachusetts, received the bill for transport, and yeah...I was broken hearted (or maybe I was just having a heart attack).

Gidget was my constant upon my return home. She always kept me on my toes riding but was sweet as can be to work around. I would spend hours in her stall, talking to her and reflecting on my experiences from the past year. She was the best listener, and I could tell she really loved me and I loved her. We spent the next couple years with highs and lows in the show ring. She slipped in the mud while entering a driving class at the end of show season 2012 and injured her stifle. We had no idea until almost a year later how much pain she was really in. Breaking my heart again Gidget....

In 2014 I took Gidget home for a couple years to spend time healing and playing in the field. During this time, I spent every single day with her. I loved looking out my kitchen window and seeing my Gidget exactly where she belonged, with me. During the time Gidget was injured, I invested in a “project horse,” Buffy. Buffy was gorgeous and full of talent, but needed some time to develop into who she would be. Luckily, through my years with Gidget, I had learned quite a bit about patience and allowing a horse to discover who they are on their own, with us only there to offer support and reassurance as needed. Just like with Gidget, I spent hours each day building a bond with Buffy and earning her trust. Having learned not to take things so personally with Gidget, I was able to quickly forgive Buffy when mistakes were made, and soon found she was an honest and eager to please horse. Most days Buffy did not break my heart. 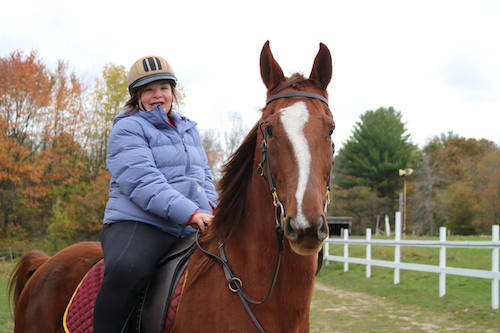 Margaret and Gidget.When Gidget was cleared by the vet to return to work in 2016 she was more than ready to go! This last year we enjoyed many, many trail rides and by the end of summer I thought it was about time to take her back in the show ring. She sold me out real good in the warm up ring (breaking my heart) but stepped it up the moment she hit the ring, winning her class, and making me look quite smart! And that was Gidget. She was real good at keeping you patient, and humble and quiet on a horse. The moment I felt like I knew what I was doing she would change that real quick. She taught me so much about riding, and I am 100% certain that without her, I never would have had the confidence to work with Buffy and I certainly wouldn't have had the patience with or faith in Buffy that I have, which has created the most incredible bond I have ever had with a horse.

The last few months with Gidget she kept trying to tell me it was time to move on even though I didn't want to listen. She was ready to teach another rider and I, with an upcoming wedding and plans to start a family, I had to make the tough decision on which horse to keep. Gidget made it as easy as possible, breaking my heart every chance she had. Riding her myself she would challenge me every chance she got (until I listed her for sale at which point she was a perfect star from then on). If I put someone else on her she was an absolute saint. Gidget began to develop a bond with a young woman, Margaret, who worked at the boarding farm. I saw how much she craved that one-on-one attention I used to be able to give her, and knew I was making the right decision. But still, way to really dig that dagger right into my heart, Gidget. 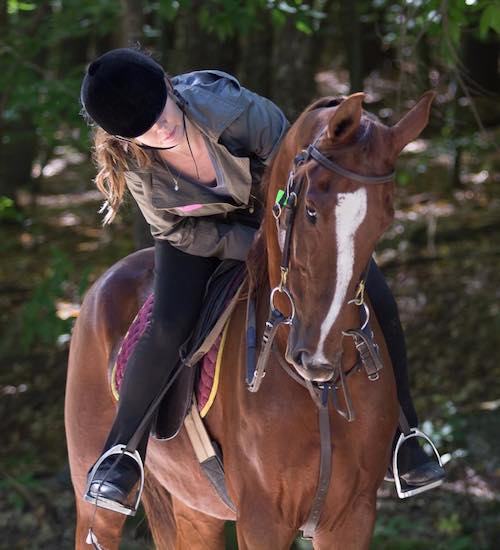 Gidget and I in 2016 at the Live And Let Live 10 mile charity trail ride ... the only Saddelbred out of 80 horses!I turned down multiple offers on Gidget. This thing or that thing just wasn't right in my eyes for her potential new home. The first time I spoke with Tiffini, I knew with absolute certainty that she and her daughter were the perfect fit for Gidget. I was so excited to let Gidget have her own kid and for her to teach someone else how to ride. In November she made her move to Indiana to live with her new family. Gidget was a quick fit into their herd and became immediately attached to her new family (aka no arm amputation attempts). I was absolutely elated to have found such an amazing home for Gidget exactly where she belonged, with her own kid to love her unconditionally.

Saturday December 31st, I received the call that Gidget was not feeling well. The vet had been out but she seemed to be doing better. Heartbreak avoided. By Sunday she was much worse and taken to the clinic (and there you go breaking my heart again Gidget). She rallied by Monday morning and it seemed maybe things were going to be okay. But by Monday afternoon it was evident that this was not the case, and it was clear she would not pull through this time. And so Gidget left my life the same way she came in, breaking my heart. So it goes with chestnut mares, I suppose....

When Gidget left, I sat down to write about her. To put into words how perfect and wonderful my horse was. To reflect on all the fairytale times I spent with her. But as I wrote, I quickly saw that Gidget was FAR from perfect. And that was okay, because it is what made Gidget, Gidget, and it is what made me the rider and person that I am today. Posting this on my Facebook page, I received over 70 comments and personal messages from people offering condolences, thanking me for sharing Gidget’s story and sharing stories of their own about the horses that have touched their lives. The horse community can be a lot of different things at different times, but when it comes down to it, we are all involved for the love of our animals, and I am incredibly thankful to be involved with people who truly understand what this horse meant to me because we all have experienced it ourselves. Thank you to everyone who has reached out with kind words, funny Gidget stories and amazing photos. Thank you to Tiffini and Jordyn for giving Gidget such a wonderful home and a kid to call her own. I am devastated for you both and I so wish you had been blessed with the amount of time with Gidget that I had been so lucky to have. Jordyn- I know Gidget would have taught you how to be a great horsewoman and you two would have made an unbeatable team. Words cannot express how sorry I am that you did not have that chance.