It’s the middle of the night and I’m holding a dosing syringe the size of a small country and twisting a horse’s ear. When I was dreaming about ponies at the tender age of five, this really wasn’t a part of the deal....

How did this happen? *cue fade-away music* 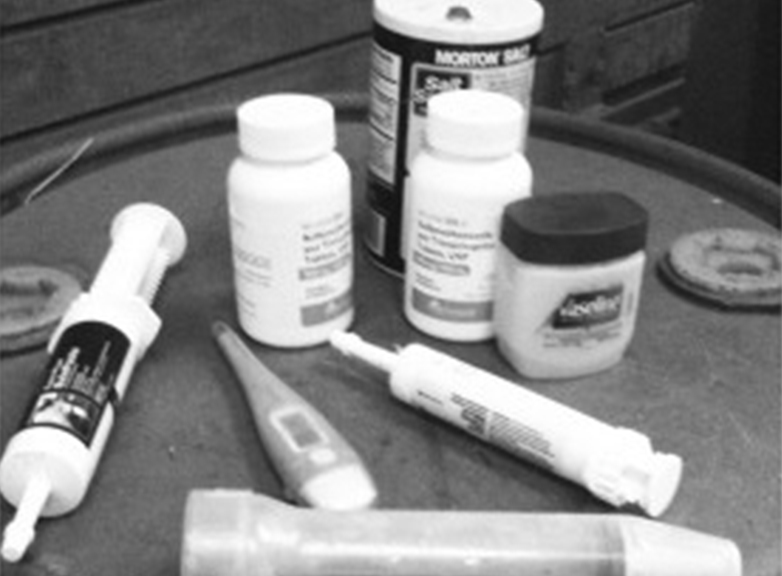 I was just getting off work and rushing to meet my boyfriend and roommate to head off to a concert when I heard my cell phone buzz. I figured it was one of them with some form of commentary on my tardiness. Turns out I was partially right: my roomie was texting me, but not to give me trouble. Rather, she was giving me troubling news — Apple was sick. She wasn’t sure what it was just yet, but it was presenting with symptoms congruent with colic. My boyfriend and I arrived at the concert, though I was still uncertain whether I should be with Apple or if my inexperience would just cause me to get in the way. I really had never helped treat an ailing equine. I just asked to be kept updated and decided to stay at the show.

Fast forward 24 hours. I’m standing on a mounting block measuring salt into a syringe and twisting Apple’s ear to convince her to do the one thing hated by just about everything on the planet — to take her meds. If you’ve been following, you understand just how much of an event this was going to be. For those of you just tuning in, let me get you up to speed. Apple is a headstrong lady, and meds aren’t really her style … neither is standing still. Needless to say, I didn’t stay on that block for long.

“Twist her ear,” my roommate told me. I took hold of Apple’s right ear with two fingers and twisted. Nothing. My roomie poked her head out from behind the horse’s back. “You aren’t twisting.” I nodded vigorously to indicate that I was, indeed, twisting. “Stop being so sweet about it. TWIST.” You know, if you tell me to twist the ear of a big hooved animal, I’m going to start out being nice about it. Turns out that is the wrong line of thought. So I wrapped my whole hand around her ear, apologized profusely, and twisted. 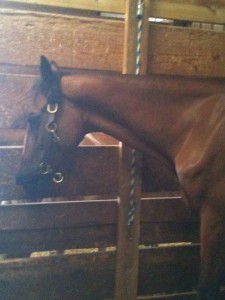 Just because I get it right doesn’t mean I’m successful. I twist, Apple picks me right up off that mounting block with that confounded ear and puts me where she pleases. This is a rinse and repeat process, which seems to be much to her enjoyment. “Is this why I am supposed to be clutching her ear?” I ask. Finally my roommate administers the antibiotic, which causes Apple to fling her head (which I was firmly attached to) wildly. I let go and drop to my feet. She has given me a gift — there is antibiotic splattered across my face.  Gee, thanks.

The vet had been out the see our plucky mare, and it turns out she had an infection rather than colic (which we were now working to avoid).  It was a lovely regiment of Banamine, vitamins, Bute, antibiotics and salt that we were charged with administering. Apple had something to say about pretty much every bit of that, as to be expected.

Once she had choked down the amounts required, we led her out to the field to graze on some yummy grass. This is usually the highlight of her day, and she milks it for all it is worth. On this particular night, however, she was having a rough time deciding to eat or not eat (after all, that IS the question). This delay allowed me to fully drink in my surroundings: the new colt was settling down from his frolicking to nuzzle up near his mother, horses were nickering softly to each other, the stars were glittering so hard you could feel them. Apple began to munch away gingerly on some grass. Turns out the barn at midnight on a cool, crisp Indian Summer night is one of the best places in the world. This is something I had long forgotten, and I guess I have Apple to thank for getting me back to rediscover it all over again.

P.S. Turns out this bug was traveling about the barn and our Apple got the brunt of it. She lost a fair amount of weight in the process, but she is slowly gaining it all back. No worries, I’m not upping her treats.