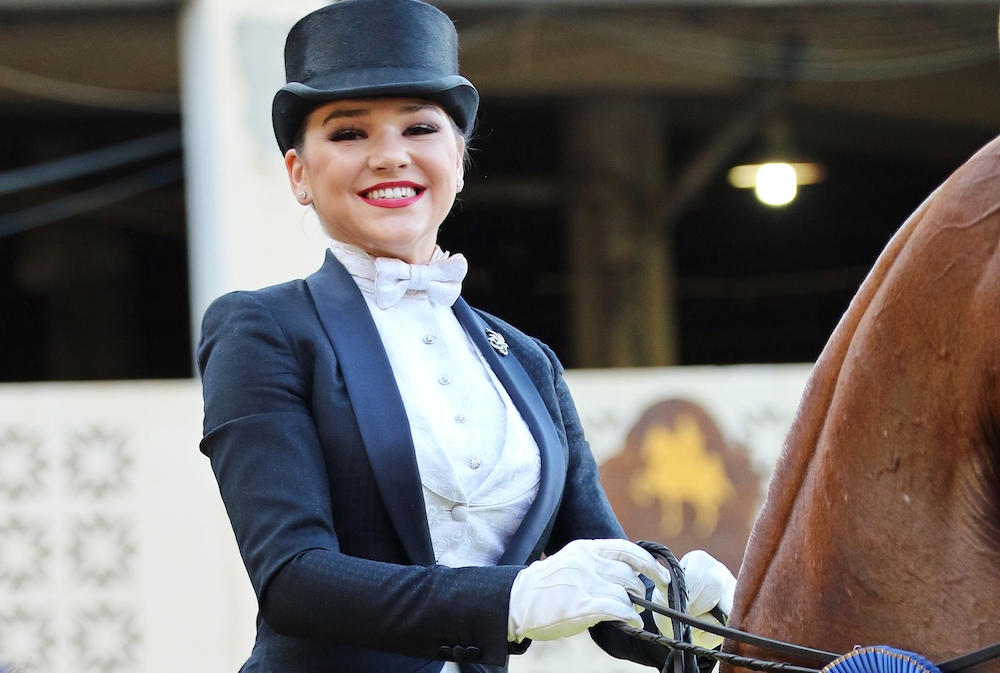 The Senior Equitation Championship at the World's Championship Horse Show always showcases the very best in Saddlebred equitation, and this year was no exception. The incredibly strong class on Thursday evening was won by Kaylee Atkinson, a name that may be unfamiliar to some in the show horse world now, but certainly won't be for long.

Kaylee rides her mount CH I'm McDreamy under the direction of Kellie and Dalton Budd at Select Show Horses. Here are five things you probably didn't know about this year's Senior Equitation World's Champion Of Champions.

She hasn't shown McDreamy much this season.

With just two shows so far this year, at River Ridge and Bonnie Blue, Louisville was only Kaylee's third show with McDreamy.

"We got him right after the Royal," she said.

But, though her shows with McDreamy have been limited, she wasn‘t out of the show ring completely, as she showed the Arabian circuit all summer.

Her biggest challenge has been her canters.

"The hardest thing has been figuring out our canters, making sure I keep him lifted," she said. "Otherwise he’s been just a dream, kind of like his name, honestly."

When she returned to the line-up from her pattern during the Senior Equitation Championship, Kaylee wasn't entirely satisfied with herself.

"I was a little upset with myself because I always know the little things I need to improve on," she said.

Still, she was happy with her ride overall, and had a blast.

"I had a lot of fun showing in that class," she said. "It was super fun to show against so many awesome riders."

She rode that class with a tear in her jods.

"He got a little squirrelly in the warm-up," Kelli said of McDreamy.

During the excitement, Kaylee ripped her pants, and wasn't sure what to do. Kellie assured her that you couldn't see it, and sent her in the ring anyway. It wasn't util after the class that she admitted the truth, and everyone had a good laugh.

"When I told you you couldn’t see anything I was lying to you," Kellie said.

Her win was a true team effort.

Kaylee lives in Arizona and flies to Select Show Horses, in Sheridan, Indiana, every other week with her mother to practice. Meanwhile her father makes sure everything is running smoothly at home. To get in extra riding time, she lives at the barn all summer long. Between Kellie and Dalton, and then the recent addition of Sarah Barclay, she has a great support system.

"Adding Sarah has been a great asset, with her knowing McDreamy," Kaylee said.

"With her addition it’s been like the dream team," she said.

Kaylee's next stop will be The Good Hands Finals at Mid-America Mane Event, where her smooth and polished riding will continue to make her a name to know.