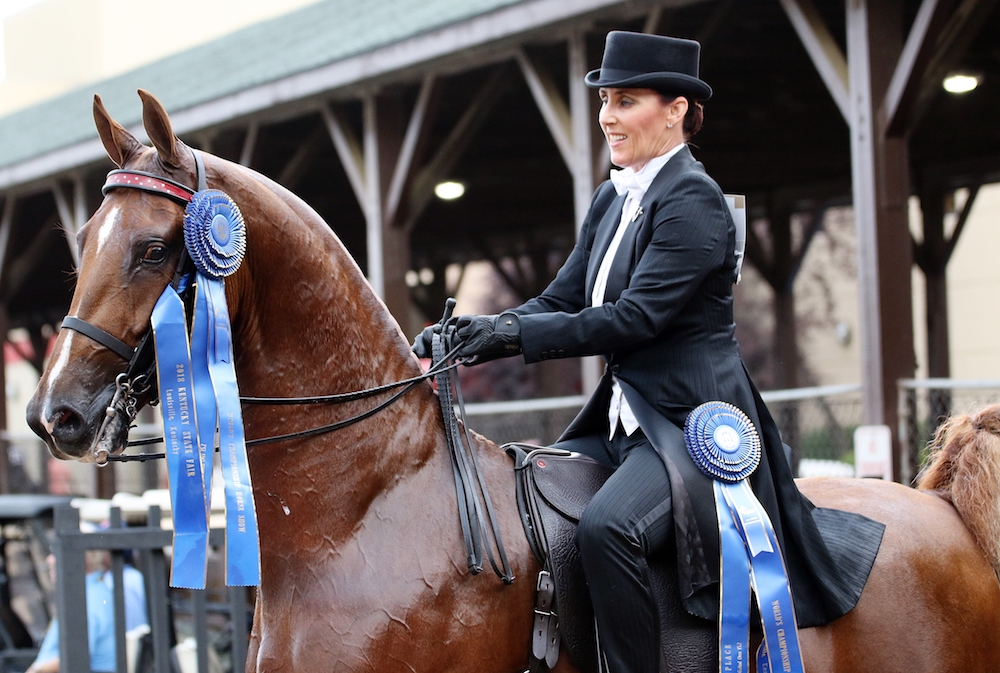 The World's Championship Horse Show, taking place this week in Louisville, Kentuky, is filled with many incredible examples of the American Saddlebred horse. But during the Monday evening session one particular horse stood out -- a sensational chestnut gelding called Snowpine's Pola Vortex.

Pola Vortex, better known around the barn as "Matt," is owned by Marie Gwinn and trained by Dena Lopez of Double D Ranch. Bred by Lisa Balcerak, who along with her husband Rick, own Snowpine Stables in Wayne, Illinois, he is by Nutcracker's Nirvana and out of their great mare CH Pola Negri.

Dena first laid eyes on the young horse this past winter when she attended the High Caliber Stables Adult Camp.

"I was at Mary Orr’s camp and decided to take a day and visit some barns," she said.

When she saw the gelding at Matt Shiflet Stables, she was taken by the horse immediately. Though he had limited show ring experience, having only competed twice in 2017, in the park pleasure division, she knew right away that he was something special.

"I love his quality and his expression," Dena said.

At Dena's urging, customer Marie Gwinn purchased the horse, and when Dena debuted him in the three-gaited division this season, the results were stunning. With wins at Asheville Saddlebred Classic, Indianapolis Charity and Blue Ridge Classic, Dena and Matt were heading to Louisville undefeated.

The dream season continued at Louisville during the first class of the Monday evening session, when Matt wowed the crowds with another spectacular performance that earned him the Junior Three-Gaited Over 15.2 World's Championship title. With his long neck, extreme motion, and show horse expression, he had spectators on the edge of their seats.

Matt's first appearance will not be his last at this year's Louisville. Dena is planning to show him back, so fans hoping to catch another glimpse of this special horse should be on the lookout. And if he doesn't make an appearance this evening, that only leaves one other night -- Saturday.