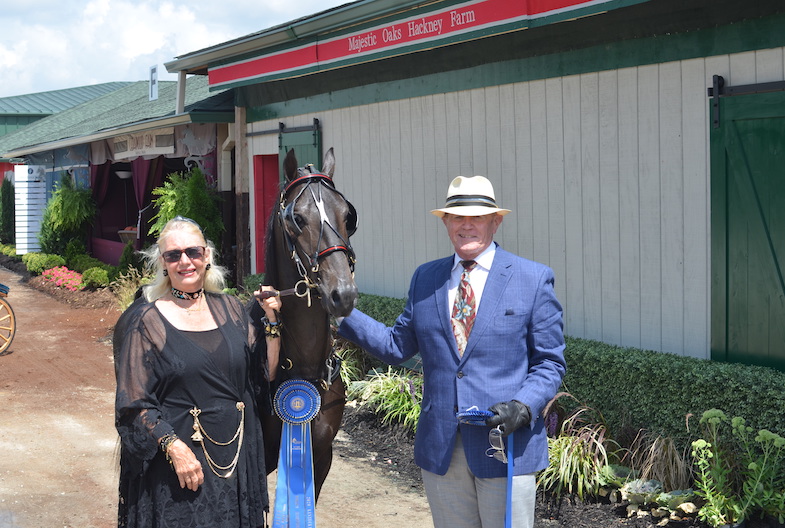 I have know Kevin Michael since my first day with Saddle & Bridle in 1988 because he worked for the magazine as our West Coast representative. Kevin first showed at Louisville in 1973 with a road pony. He was only 16 years old at the time and those days the classes weren’t split so he showed with adults. He earned a seventh place ribbon and he remembers that feeling to this day.

In 2002 he catch-drove another pony called Tina Turner and won his first world title for Anna Marie Knipp. Just a couple years ago he showed CH Crystal Creek’s Commander to the win for Sandra Surber, who was unable to make the trip. Today, Sunday August 23, was another special day for our hero Kevin Michael, because he was asked to show Heartland Make My Day for Majestic Oaks and Kay Marschel.

Kevin didn’t have even one practice drive with Make My Day, but despite having never driven the pony before, Kevin was not nervous going into the ring.

“I’m never nervous with any of Rich and Maureen’s ponies,” he said.

Not only did they win the Adult Amateur Junior Hackney Pleasure Driving Pony World’s Championship, Kay was second herself with another one of her ponies, Anticipation’s Patriot LF. When they got back to the stalls, they were both excited and Kevin immediately said to Kay, “Thank you, that’s a great pony!”

Kay was beaming and congratulated him. When I suggested to Kay that she picked the wrong pony to show today she gave me a look and said no, she couldn’t be happier.

A mild-mannered guy, Kevin timidly asked Kay if he could possibly have one of the World’s Championship ball caps (every winner gets two). Kay chuckled and said, “Sure, I forgot to pick up the reserve ribbons.”

But it’s not just his latest Louisville win that makes Kevin Michael a hero; last week he was staying at Jennifer Dixon’s farm in California when wildfires broke out. He was there instantly and saved countless horses for Jen and Gen Hess. He said it was an awful experience – the heat, the smell, the sound of the scared horses, but he humbly said anybody would do that, and that he was fortunate to even be able to come to the show.