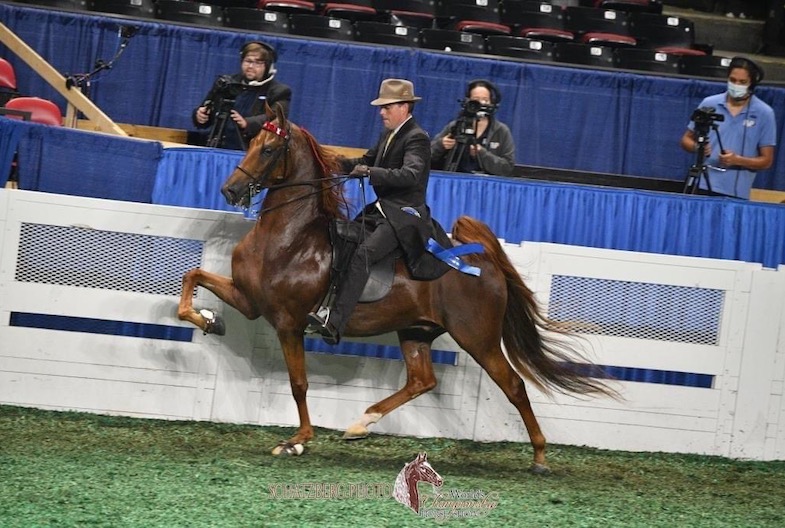 Sunday night at the World's Championship Horse Show saw an extra special win for Chris Brannan aboard the stunning Wingswept Blown Away in the ASHBA Sweepstakes Four-Year-Old Five-Gaited class.

Wingswept Blown Away, known as "Gus" around the barn, is by by Samur and out of Walterway's Blue Me Away. He is owned by Richard and Dianne Gilbert, but he was bred by Chris and his wife Stephanie at their Wingswept Farm in Nicholasville, Ky.

Stephanie knew he was special from the start.

But getting Gus to this point hasn't always been easy. According to Chris, the most challenging part of his training has been keeping him relaxed and keeping his nerves from getting to him.

"He has a lot of energy and is very powerful," he said.

Heading into Louisville, Gus only had three shows behind him, so while they knew they had a special horse, they also knew he was inexperienced in the show ring. Because of that, Chris made his goals simple ones.

"He’s not that seasoned yet, so I was hoping to have him tuned in and have a good ride," Chris said.

The pair did all that and more, thrilling the crowd during a very deep class of 4-year-olds. When Gus was called as the winner, it was Chris' first time being called as the winner on the Green Shavings as well. Making the win even sweeter was the fact that he was doing it on a homebred horse.

"It was super exciting," Chris said. "We always thought and hoped he would do it, but when you enter that arena anything can happen."