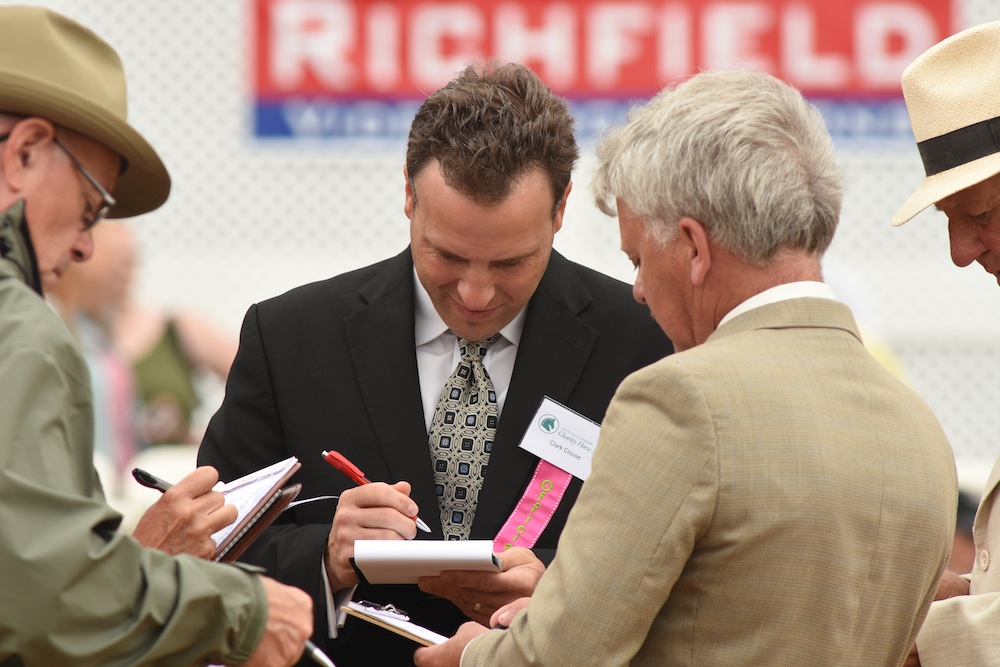 Not one, but three judges stand in center ring at most of the larger shows on the Saddlebred show circuit. The competitors have worked their hardest to impress each of these judges, with no room to make adjustments without at least one pair of eyes on them. The judges turn their cards in and take a well-deserved seat as the tabulators get to work figuring out who will walk away with the blue ribbon. What is this magic that takes the opinion of three different people and creates the official placings? In today’s day and age, you may assume it is a fancy computer system that spits out the results, but this is not the case. It’s paper, pencil and the human brain.

The Majority Opinion System is used at all United States Equestrian Federation (USEF) rated shows that utilize three judges. This system is not based on points or interpretation, but by the placement of entries by each judge. At first glance it seems like a very complicated system, but in reality, it is very simple to understand. Using circles, checks and X’s the final placements can be determined in seconds by a seasoned tabulator and just a few minutes by the novice.

Once the cards are turned in, they are lined up evenly in front of the tabulator. It is suggested that they be placed in order of Call Judge, Second Judge and Third Judge, though the placement of the cards does not affect the final result. The votes are read from left to right and then top to bottom. The first time that a number appears, it is marked with a check mark. The next time it is circled, and finally it is crossed out with an X when it shows up for the third time. These steps are repeated for each number on the cards. Once this has been completed, the first place horse will have its number circled highest on the cards. 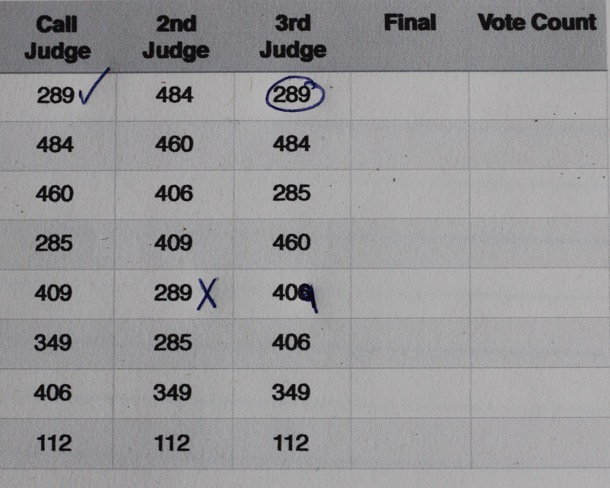 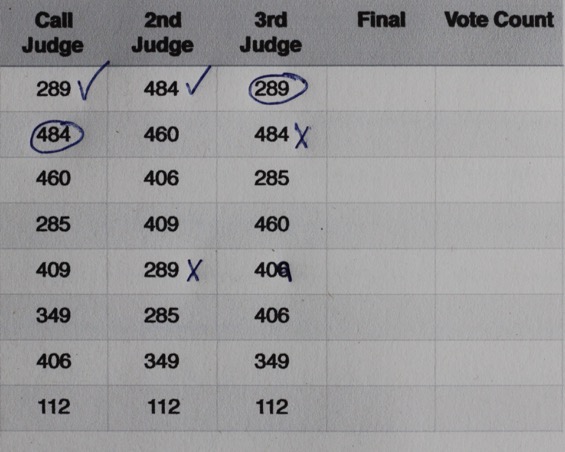 Moving to the next entry, #484 gets a check mark in the 2nd column (its highest placement), is circled in the 1st column, and X’d in the 3rd column. 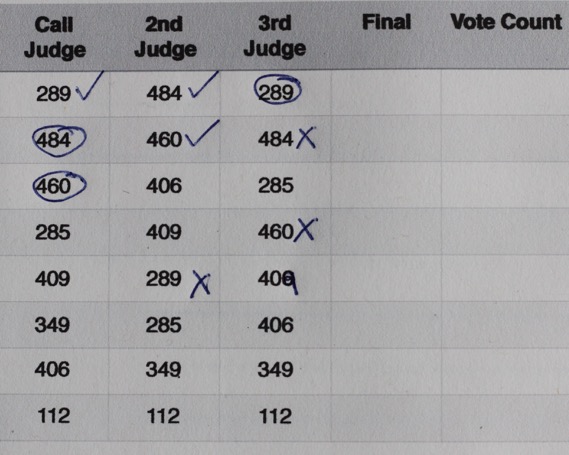 Entry #460 is the next number to appear on the cards in the 2nd column (check mark). Moving down, it is in the 1st column next for the circle, and in the 3rd column for the final time receiving the X.

This process is repeated until all of the numbers on the cards have been accounted for. Once all of the votes are counted, the final placement is determined by the order of the circled numbers, top to bottom. 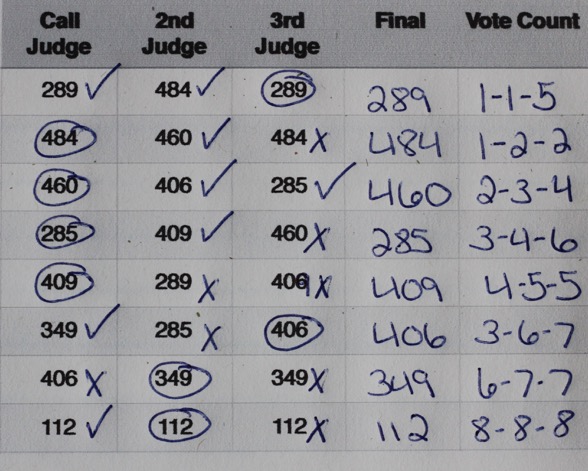 Things get slightly more complicated when there are two or more circles on the same line, creating a tie. There are several types of ties that need to be broken by the tabulators and lucky for them the USEF and United Professional Horsemen’s Association have specific rules for breaking such ties.

Similar Ties — Two or three circles on the same line but the vote counts are different. The placings are determined based on the highest 2 out of 3 vote. An example would be two entries that are circled on the same line. One has a vote count of 2-4-5 and the other has 3-4-5. The entry with the 2nd place vote would be placed higher, regardless of where the circles are.

2-Way Identical Tie — Two circles on the same line and the vote counts are identical. This also will be determined by the highest placings from 2 out of the 3 judges.

3-Way Identical Tie — Three circles on the same line and all entries have the exact same vote count. If the tie involves a first place vote, there will automatically be a workout for those 3 entries. If the tie does not involve a first place vote, the final placing will be determined by the “Fall of the Cards.” This means that entry highest on the Call Judge’s card will receive the higher placing, the 2nd judge’s choice comes next, and the 3rd judge’s choice will come after that.

It is rare but possible for an entry to win the class without a first place vote. This occurs when there is a large variation in each judge’s opinion or when they each witness a mistake by a different entry.

In the above practice class, there were 8 entries and 8 placings. Some shows will award only up to 6th place, but the tabulators will calculate through 7th in case there is a disqualification. The same goes if they show places through 8th; the tabulators should calculate through 9th. If there are more entries than placings, some entries may not receive a vote from one or two of the judges. It is possible that this entry will receive a ribbon and final vote count will display an “x” (i.e. 3-7-X).

USEF recommends that there be a tabulator and a checker. As the cards are being worked by the tabulator, the checker works behind them to ensure that the placings are correct. At this point, the announcer will usually use this time to inform the crowd of the class sponsor or trophy donor(s). If more time is needed, then the announcer can fill the hall with miscellaneous announcements to keep the crowd entertained and informed. The checker will sometimes give the announcer the first place winner while the tabulator finishes working the cards. With Sandy Backer and Beth Snider working the cards, the process is usually lightning fast leaving Peter Fenton, Peter Doubleday or other announcers with little to no time for idle chitchat.

“I will say this; I love that this program is not based on points,” Sandy Backer said. “Once people understand that there is no math involved it is easy to see and understand.”

The best way to truly understand the system is to use it. Everyone involved with showing American Saddlebreds (trainer, owner, parent, exhibitor) should go to USEF.org/documents/breeds/MOS.pdf to view the file on the Majority Opinion System. The examples and practice sheets can easily be printed for a fun activity at your next barn function.