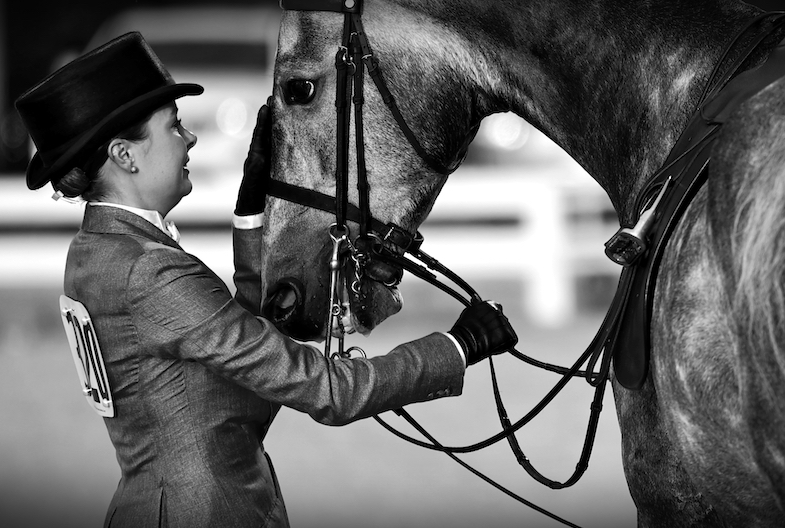 Photo by Julia Shelburne-HittiI’ve been an equestrian all my life; I literally don’t remember a time when I didn’t ride horses, and except for a couple pony rides on a Quarter Horse when I was 2 years old and a semester of western and hunt seat during college, it’s always been saddle seat and Saddlebreds. This means that I’ve spent my entire remembered life trying to explain the saddle seat discipline to others ­– both horse people and non-horse people. And let me tell you … sometimes … I’m tired.

Don’t get me wrong, I love sharing the joy of horses and my chosen breed and discipline with others. I’ve experienced firsthand the blessings they can bring to someone’s life; I want everyone to know it, and I like to think that I’ve done a fair amount throughout my life to make that happen. But after 30 plus years of trying, sometimes, when it comes to one-on-one encounters, I find myself wanting to disengage from the casual conversation rather than plowing forward into the same old tedium, and I have to ask myself why.

Maybe it started in grade school, when classmates would ask what I considered “dumb” or insincere questions about my horses. “What do you do when they poop?” one of the boys would ask me. “What do you do when you poop?” I’d respond, with a roll of my eyes, effectively killing the conversation before it got anywhere near talk of breeds or disciplines.

As an adult I realize that it’s possible these questions were more sincere than I knew at the time, but back then, when everything feels like an attack to someone who is even the least bit different, I was only able to see them as veiled insults. When the questions felt more sincere I would try my best to explain what I did; I would move my hands to try to explain the concept of motion. I would show classmates pictures from Saddle & Bridle. But it never really seemed to make a difference.

As an adult it’s finally “cool” to have horses. Somewhere around college things shifted, and people began to see it as interesting and unique, or perhaps more accurately, began to feel comfortable letting it be known that they felt that way. No one asks “dumb” questions anymore. I no longer feel like I’m being made fun of. Now, as I’m trying to check in at the doctor’s office, I wonder just how much the receptionist cares, and if it’s really worth my time to try to explain something that’s honestly pretty complicated – and that she’ll probably forget five minutes later.

“What kind of horses do you have?” someone will ask me.

I explain that it’s an American breed, and they’re very versatile, but a lot of them are ridden saddle seat. What? They ask. Saddle seat, I repeat.

I tell them that it’s an English discipline, but we don’t jump. I see their eyes light up in recognition. “Oh, they do those fancy pattens, right?” they ask. And I say sometimes, but in my heart I know they now think I ride dressage.

And at this point I have to make a choice. Do I keep trying, or do I let them live in their dressage delusions? I usually keep trying, and I tell them they’re probably thinking of dressage, and in most classes we don’t do patterns.

“What do you do then?” they ask. So I try to explain how we go around the ring in both directions at different gaits, realizing how boring that probably sounds. But I tell them it’s not. I demonstrate with my hands. I whip out my cell phone and show them a video – ammunition I didn’t have as a child.

Most of the time the person responds by asking if I know their uncle or cousin who has horses, or by telling me that they got “run away with” on a trail ride the last time they rode – really just the adult version of “What do you do when they poop?” And I smile politely as the conversation dies out, along with all my efforts. Over and over again. For over 30 years.

Just as I did in grade school, I still want nothing more than to talk about my passion with others and get them excited about it, too. But that’s the thing: I want them to be excited about it, too. It’s hard to bare your passion, and effectively your soul, again and again for little return. But that’s what good Saddlebred enthusiasts do, right? There is no more common mantra in the Saddlebred industry than “promote the breed.” Saddlebred enthusiasts have been saying these words, and trying to put them into action, for a long time, and I often wish the breed would just “get promoted” already. That Saddlebreds were as familiar as Quarter Horses. That saddle seat came to people’s minds as easily as dressage. We'd still have work to do, but it would remove some of the tedium.

The thing is, there’s only one way to get there. So, I remind myself that I can’t be the only one who is tired, and that being tired is okay as long as we struggle on. Because we know we have more than just a product worth sharing – we have a passion, a once-in-a-lifetime relationship, a lifeline, a true gift. And giving that to someone else is worth a little tedium.

So we’ll listen to the runaway trail ride stories. We’ll tell them we don’t know their uncle. We’ll perfect our descriptions of gaits and disciplines. And we’ll wait. Because maybe, just maybe, one day their eyes will light up the way ours do when we talk about our Saddlebreds.

And then we’ll invite them to come to the barn with us. And once we do that, we know the horses will do the rest.