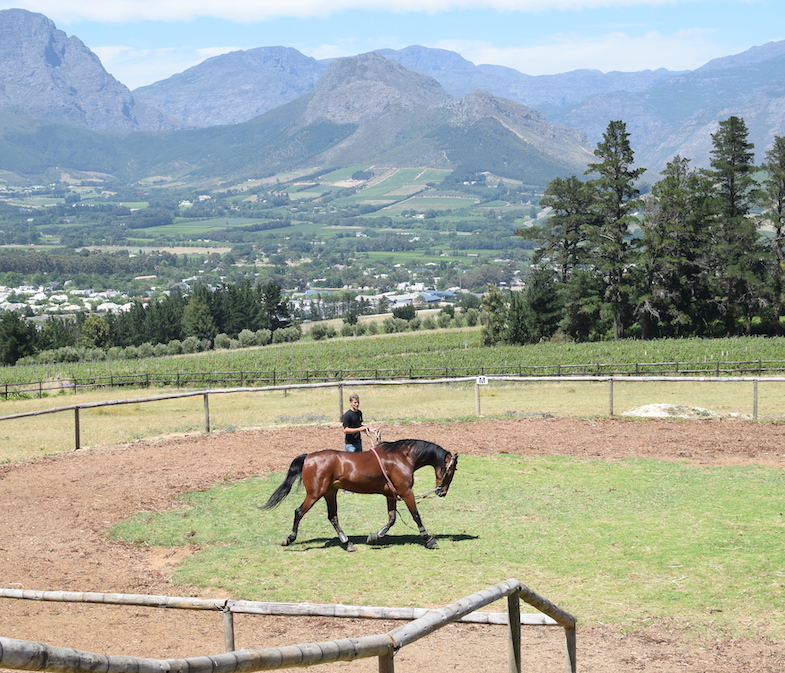 After 25 years of married life, my wife, Christy and I wanted to plan a special trip to celebrate. Of course, the show season is too hectic a time for vacations, so we planned a trip for early December. Our first thought was to go to Italy, but after checking our “bucket lists,” we decided on South Africa. My brother and I had travelled to Bloemfontein about a zillion years ago, and I remembered what a beautiful and exciting country South Africa was.

After a month of obsessing about the trip, we booked four nights in Cape Town, two nights in the wine country of Stellenbosch and Franschhoek, and three days on safari in Sabi Sands, a huge, private game reserve adjacent to Kruger National Park. Luckily, while in Louisville last summer, I ran into my friend AJ Bruwer and told him about our upcoming trip and asked him if he knows Stellenbosch. Coincidentally, he told me that he had been born and raised there and advised me to give a call to his good friend Francois Dercksen, saying, “He knows everything about that area!” I’m so glad I saw AJ that day, because he was right! 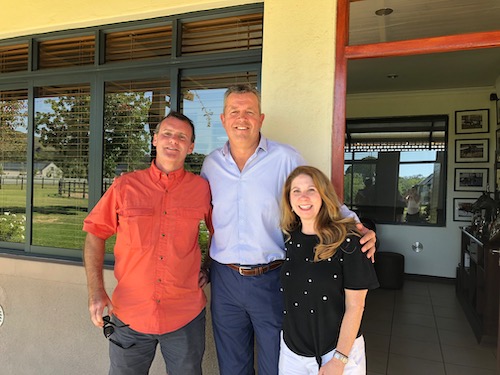 I messaged Francois last October and he immediately responded to me with a full itinerary for our days in Stellenbosch and Franschhoek! He planned to have lunch with us at Volkskombuis in Stellenbosch and even scheduled several winery visits for us. After four wonderful nights in Cape Town, Christy and I made the 45-minute drive toward the wine country, with Spier Estate (a recommendation from Francois) as our first stop. The instant we arrived, I knew we were lucky indeed to have such a skilled travel advisor. Spier was founded about 120 years before our country was born – in 1692. The grounds are stunning, with beautiful Old Dutch buildings, a museum, an eagle encounter, spa, vineyard Segway tours, artisal studio, beautiful vistas and the immaculate tasting room. We could have spent three days there and not have seen it all.

After a wonderful tasting, we continued on to Stellenbosch for lunch with Francois. For me, driving in South Africa was a bit of a challenge, with the steering wheel on the “wrong” side of the car and the car on the “wrong” side of the road! However, we arrived safely at Francois’ lovely private club and a hostess who expected our arrival and escorted us to Francois’ table. 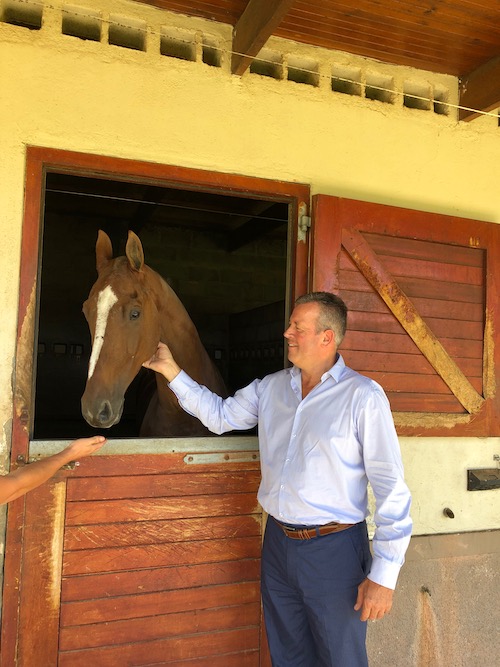 Christy and I immediately liked Francois – he is tall, handsome, gregarious and “smiley,” like all of his countrymen. The lunch was perfect; kingklip (a fish that is a type of eel) for Christy and spring bok for me. Francois had wine at the ready – an endless bottle (or three) of La Motte Sauvignon Blanc. His trainer, Aidriaan Odendaal, also joined us at the table. Despite having just completed an 11-hour drive home from the Parys Christmas Festival horse show, Francois regaled us with stories of his start in the horse business. He told us that he started as a young kid and that it’s been a passion ever since. Although his wife, Elsje, isn’t involved with the horses, his four beautiful children, Francois, Madine, Anje and Denielle all show. In fact, Anje was a member of the South African World Cup Team and showed in Lexington last summer. The family usually travels to Louisville, and Francois showed there in 2012 and 2013, earning 6th place in the Fine Harness World’s Grand Championship. Unfortunately, he has been unable to bring his own horses for the trip, since the flight and U.S. quarantine restrictions are too hard on the horses. 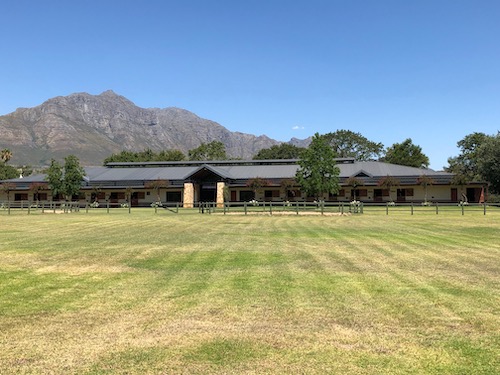 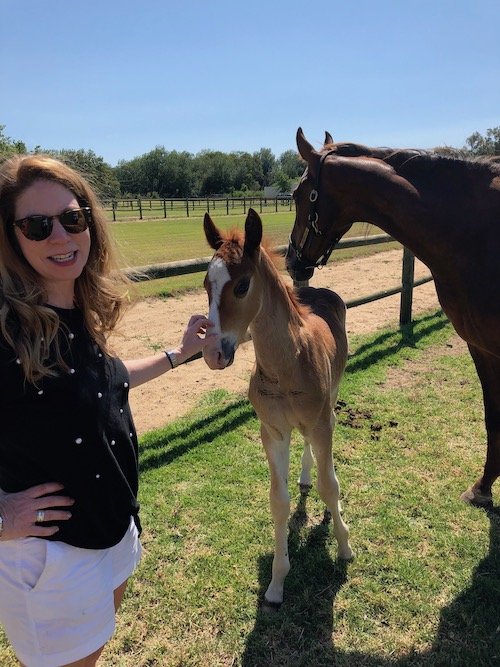 After lunch, Francois gave us a tour of his impressive barn and his home. He explained that he selected its stunning location and built the house and surrounding neighborhood himself, not far from the center of Stellenbosch. Christy asked if she could have a job with him – she is pretty good at mucking out stalls! We met Aidriaan’s wife there, pretty Marguerite, who works at DeBosch and also represents Pieter Hugo’s magazines. Although the horses were tired from the show and the trip home, and many even still had their show braids, Christy and I visited all of them, gorgeous, big horses, all with good conformation. Christy especially enjoyed the three foals.

After our visit and tour, Francois whisked us off to his favorite winery. We hesitated a bit, since we did not want him to miss another day in the office, but within minutes we were at Rust and Vrede (translated to “peace and relaxation”), a picturesque winery located opposite Ernie Els’ vineyard. Christy and I thoroughly enjoyed our tasting there – in fact these wines were some of our favorites from the whole trip. We found the area similar to what we’ve seen in Napa Valley, but without the buses, the huge crowds and sometimes impersonal service.

After the tasting, Francois led us through the quaint town of Stellenbosch, which is a “college town,” with beautiful Dutch-style churches and buildings. Next, we were off to the adjacent town of Franschhoek, with dinner at Reuben’s, again at Francois’ suggestion. It was among the finest dinners we’ve ever had. I cannot thank Francois enough for his graciousness and patience with all our questions. It was a truly memorable day!

Franschhoek is smaller than Stellenbosch, but equally beautiful. Nestled at the base of the mountains, the town is surrounded by grapevines as far as the eye could see. I imagine it is like Bordeaux, and strong French and Dutch influences can be felt everywhere. Although we had plans to visit La Motte Wine Estates and Delaire Graff Estates, I also wanted to drop by another Saddlebred Farm, Courchevel Farm, owned by Sonja Hellinger, who I’ve met before. 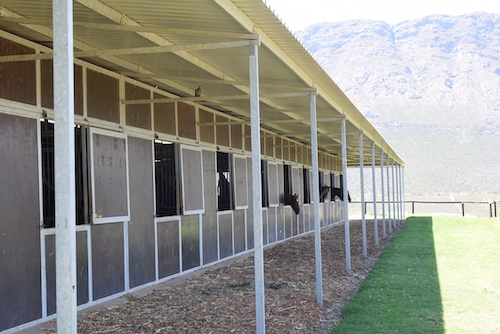 Although I’d sent Sonja a message about our trip a couple of months earlier, we had made no definite plans and Christy worried about dropping by unannounced. But I thought we’d take a chance, and I was right! South Africans are proud of their horses, their country and their businesses, and I don’t think they see many visitors from St. Louis, Missouri! We drove our little BMW up the mountain and I asked the gate attendant if Sonja was available. He disappeared for a couple minutes and then opened the gates and directed us up the hill. The setting is indescribably beautiful, with the mountain as the backdrop, bright green grapevines lining the hillside and gorgeous pastures and arenas set out for the horses.

Sonja’s Courcheval Farm rents exquisite cottages to the tourists, and they can even ride horses in the vineyards. Courcheval means the “Heart of The Horse,” and the farm is located in Chamonix vineyards, owned by Sonja’s ex-husband Chris Hellenger. Chamonix is a great wine that features prominently on the wine lists of many fine restaurants all over South Africa. We pulled in front of the barn and I immediately recognized Sonja – tall, elegant and gracious. At her side was “Pinot,” her lovable Great Dane who greeted us too. Sonja’s barn is wonderful, with a breeze flowing through the huge stalls and the workout ring just below it. The horses are all happy, and Christy offered to work there as well. Although Sonja had not shown at Parys this year, we were able to see her trainer working horses in the ring and toured the impressive barn and tack rooms. 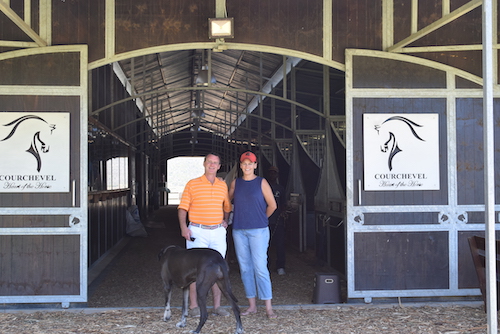 Sonja insisted on taking us up to her French provincial-style home, past rose gardens and a small lake. Her home is stunning both inside and out, and the biggest thrill for me was seeing a 1996 issue of Saddle & Bridle magazine prominently displayed on her coffee table with a Chamonix stud horse on its cover. It was Never On Sunday who was the South African Fine Harness Grand Champion at Bloemfontein. I was there when he won, some 20 years ago! We talked about Sonja’s horses and her wine, and she invited us to see her wine cellar. The cellar is actually a little house adjoining her home, with a huge antique padlock on the door. She even treated us to a couple of bottles of Pinotage in a carrier box decorated with red roses and tri-colors ribbons. Christy and I took them home in our luggage, and we are planning to drink them on a special occasion. While Christy thinks birthdays or anniversaries are a special occasion, I believe that Saturday night is special, so they may not last long! It was soon time for us to leave for lunch, so we hugged Sonja goodbye and said we will meet again.

Although I could go on and on about our trip (I actually took picture of our meal for the first in my life at Graff!) I think I’ll end my story, because it struck me that our two days in Stellenbosch and Franschhoek were a highlight. Just three days earlier, Christy had tried to kill me by demanding that we hike up Table Mountain, so to me our visit to our South African friends seemed like we had arrived in Heaven! Thanks to everyone for their suggestions, generosity and hospitality. I recommend that anyone who is game for the plane ride visit South Africa as quickly as they can. If you do, you will find that the American Saddlebred industry there is alive and thriving.