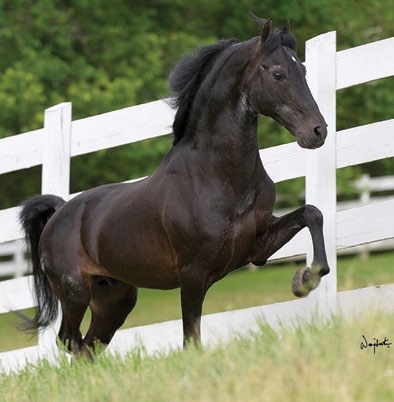 It was somewhere around midnight at the World’s Championship Horse Show when I found myself seated in a director’s chair at the Larry Ella Stables and Bent Tree Farm Ltd. stabling area, listening to Karen Waldron speak. I was exhausted; the evening session had dragged on as sessions at Louisville will do, and a wood chip mulch cross-country trek in heels was the price I’d paid for the interview. But as she began to speak I quickly forgot all of that. Who was this woman? And why weren’t there more of her?

At my request (I’m an equine fan, first and foremost…) she took me back to meet the World’s Grand Champion harness pony phenomenon Giselle, who won her fourth Harness Pony World’s Grand Championship and Harness Pony Mare Stake World’s Championship this year with trainer Larry Ella. As Giselle sniffed at us hesitantly and I snapped a few pictures of her with “Dolly,” (the stuffed doll who had mysteriously appeared outside her stall at a horse show some years previously and now wears all Giselle’s World’s Championship braid ribbons) Karen continued to tell me about the Bent Tree Farm Ltd. operation and how it encompasses much more than most in the Saddlebred and Hackney worlds are aware.

What the show world knows as Bent Tree Farm Ltd. actually falls under the larger umbrella of Bent Tree Farm Equine Sports Complex, an operation situated on the historic Walnut Grove Farm in Shawsville, Virginia. Bent Tree was founded in 1973 as a Saddlebred training facility, eventually evolving into a Hackney and Friesian operation. However, in recent years warmbloods and vaulting have been added to the farm’s repertoire, along with a Pilates and equestrian fitness center.

The farm is constantly evolving and, while it may seem strange for one place to serve as home to such a unique combination of breeds and disciplines, they all fit together seamlessly through the farm’s true focus: a dedication to holistic health and fitness and the highest level of performance for both human and equine athletes – Giselle included. 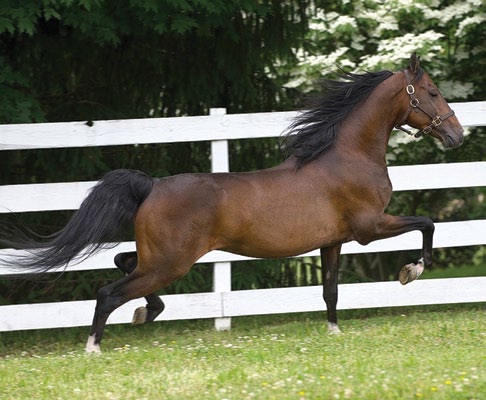 Though many great show ponies have hailed from Bent Tree Farm, the multi-titled stallion Vindicator is still considered one of the greatest. Karen first spotted him in the Junior Harness Pony class at Louisville in 1990. She immediately wanted to buy him, but at the time he wasn’t for sale. However, she approached owners Ed and Jean Wilson and asked if she could have right of first refusal if they ever decided to sell him.

“That’s one trick I have learned over the years,” she said. “If you see an animal and totally connect with them, walk up to the owner and ask that.”

Just one month later, the Wilsons made the decision to sell, and Karen purchased the pony who would have not only an unbelievable show career with her, but would later become one of the cornerstones of her breeding program at Bent Tree Farm.

“It’s not just the showing part, it’s what he has helped produce and what his daughters have produced for us,” Karen said of Vindicator’s legacy.

The now 29-year-old stallion has sired such greats as multi-time World’s Champion Night Editor – the sire of such excellent show ponies as Early Edition and Aragorn – and the champion road pony Zeus. He has also specifically left his mark on his broodmares, producing mares such as Juliana – the dam of show stars Outside The Lines and Go Daddy – and of course My Sweet Georgia Brown, the dam of Giselle. (“She is, without a doubt, the best thing to come out of our farm,” Karen said of Giselle.)

“It wasn’t that I went out and purchased a bunch of broodmares and said, ‘today I’m going to get into the breeding business,’” Karen said. 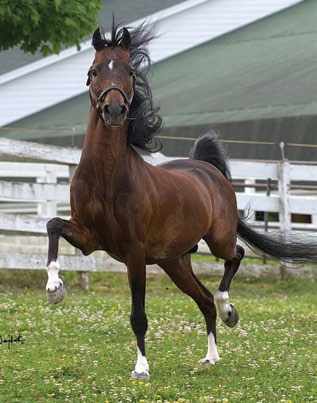 Though she has a few yearlings at home by Par Excellence, most of the ponies in her current show string, including Giselle, are by her sire, Mark Of Excellence. Champions Tri Mark and Night Editor are standing at stud this year as well.

“We’re very carefully crossing back to some of our Vindicator mares,” Karen said. “Knock on wood, so far it’s working.”

Perhaps one of the reasons it’s working is be­cause Karen is so selective in the breeding of her horses.

“I am not one of those people who breed 50 – 100 and throw them away,” she said. “We do a great deal of shelter work and I go on a tirade against people who throw stuff away. We are so careful.”

She and trainers Lee Hudson and Larry Ella have many indepth discussions about a particular stallion and mare com­bi­nation before they ever make the decision to breed. And if that means only breeding one or two colts a year, Karen is fine with that.

“It’s about bal­ancing,” she said. “If we don’t breed one this year, that’s okay. I’m not doing this to make money in the industry; I’m doing this because I want to produce some really phenomenal animals that perpetuate the industry."

But while Hackneys are still a large part of the operation at Walnut Grove, in a sense, the farm has always been about more than show horses. For many years Karen has held a passion for health and fitness, and in 1996 she opened her Pilates studio, the Center At Walnut Grove. Husband Shawn, an accomplished dancer, brought a very strong dance component to the undertaking. Then, in late 2007 and to even Karen’s surprise, her non-horse husband became in­terested in the equestrian sport of vaulting.

“He does not come from a horse background at all,” Karen said. “Zero.”

But after seeing a demonstration at the Devon Horse Show, Shawn said to her, “I think I’ve found the equestrian sport I’m interested in.” This thrilled Karen, who had tried previously to teach him to ride and drive – something she swears a spouse should never try to teach a spouse to do. After just a few lessons Shawn was hooked, and was lucky enough to become connected with people who could guide him in the right direction.

"The right people fall into your lap when you're supposed to do something," Karen said.

For Shawn, the right person was his first coach, Kerith Lemon, who made the introduction to his current coach, Jacques Ferrari, the World Champion Male Vaulter at the 2014 World Equestrian Games. With the help of these and others, the Center At Walnut Grove started taking on a different life, evolving from a Pilates and dance studio into more of an equestrian fitness center. They began offering equiBALANCE at the studio, a Pilates and fitness program for equestrians, and hosting workshops and clinics at the farm, even the United States Equestrian Federation’s Rising Stars Clinic for young vaulters across the United States, all with great results. Adding to the success were Shawn’s accomplishments, as he took the national men’s silver title in 2009, in just his first year competing. Karen has gotten into the act too, learning to lunge the horses while Shawn practices his vaulting – a much more complicated and intricate process than a Saddlebred person might imagine.

“Trying to lunge a horse correctly is the hardest thing I’ve ever done,” Karen said. “It’s harder than trying to ride a horse correctly or drive a horse directly, because you have someone’s life in your hands.” It requires constant observation every second (always of the horse, never the vaulter), keeping the horse on the same consistent circle and moving in frame. And these aren’t just any horses, but upper-level dressage warmbloods – the standard for vaulting horses of the highest level.

The warmbloods were a new experience for Karen and Shawn, but they are both open to learning everything they can.

“Each top person you study with has added more knowledge and depth to what equines can do,” Karen said. “But it’s a very long process and if you rush them you ruin them.”

As someone who has a foot in both worlds, Karen has found that this principle of patience is one aspect of vaulting that applies to all disciplines, and is particularly useful in the saddle seat world.

“It’s taught us to not be in a rush and to take as much time as the animal needs,” Karen said. “It’s not about what show we’re going to or what ribbons we think we want to achieve. It’s about having the animal the best it can be in that time.”

She has found great success in applying this principle to her ponies, particularly those by Mark Of Excellence, who are brilliant but often complicated.

“Mark Of Excellence ponies are the gamest there are, period, the end,” Karen said. “Giselle has been the testament there. She is a bundle of nerves and we just let her tell us what she is able to do and when.”

Just this year at Louisville she made a similar decision with a stable mate of Giselle’s, choosing to not show back a pony who, though taking second in the qualifier, proved to them she wasn’t really thinking well enough to be there.

“She is on the edge of going the wrong way and there is a line you don’t cross because you won’t get them back,” Karen said.

So, despite the fact that she knew they could’ve gone back Saturday night and had a good shot at taking first or second, she instead made the choice to scratch, and had no regrets about the decision.

Another aspect of vaulting she believes the saddle seat show world could benefit from is the emphasis on fitness for both horse and rider – something near and dear to her heart. Horses are required to pass a soundness check before competing, and vaulters must stay in top physical condition.

“It is not fair for a horse trainer to have to condition a horse when a rider is not willing to put the same amount of time and focus into their own condition,” Karen said. “I’ve seen trainers work their butts off to try and condition a horse just to see the rider get on and not have the mental focus or physical ability.”

For these and many other reasons, Karen would love to introduce vaulting to the people in the Saddlebred industry, even to those who have no desire to study vaulting competitively.

“I’m doing it strictly to learn to work my own horses better,” she said.

And she has many horses to apply it to – in addition to the Hackneys and warmbloods, she and Shawn have a number of Friesians for pleasure and carriage driving, as well as dressage. It is, not surprisingly, an extensive range of options, and the future is wide open.

“I have no idea what we’ll be doing next year,” Karen said. “We’re both just so open to seeing where it goes.” If the past is any indication, they will more than likely go right to the top. If they do, Karen will know what got them there.