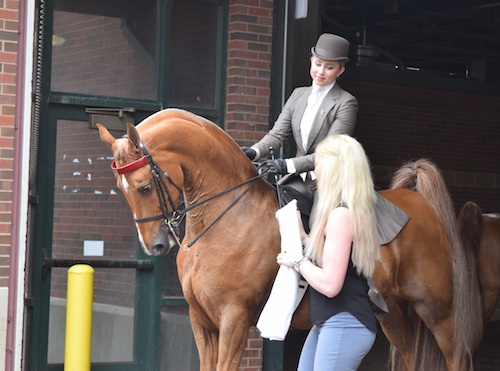 Cameron Kay topped all four of her classes. She won the Good Hands and Saddle Seat Equitaiton Senior Championship aboard CH Reedanns Heir To Glory and had two winning performance rides aboard Mystery Magic as well. By Allie Layos and Meredithe Steinhauer.

Horse shows can be known for the fun, the parties or the location. They can be spring shows, used to test new teams, or championships and finals, in the late summer and fall. But, in this world of practice shows and those that are practiced for, Midwest Charity stands uniquely alone.

Midwest offers fun, great nightly parties and a convenient location, but if one thing defines the show, it is the fact that it is consistently used as a bridge between the shows of the spring and early summer and what is thought of as the heart of show season. It is the first look at the excitement we might see at Louisville, and the first time many exhibitors across the country get to test their skills against the competition they will see there. It is where you spot future champions, too; for some, it is their only stop before lighting up Freedom Hall.

This year Midwest saw a large number of entries. Rather than just filling the barns along the main street, exhibitors were stabled in every building that could suitably house a horse. The competition was intense, and, if past years are any indication, the summer and fall will only get more and more exciting. 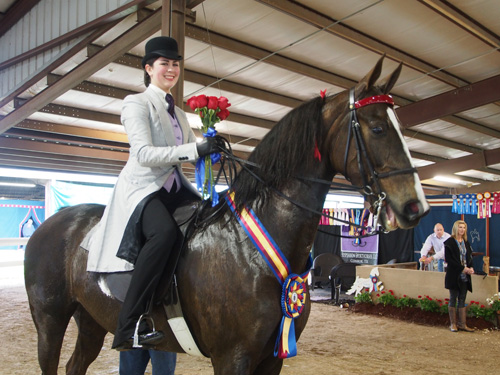 The opening ceremonies had just finished Friday night, and the leadline class was entering the ring – a single child clad in hunt seat attire aboard a dark colored pony of uncertain breeding. I was sitting patiently, waiting for the Saddlebred classes that were to begin next.

Behind my seat, a mother and her two children, a boy and a girl, stood watching what was presumably their barnmate being led around the arena.

“Can we go sit?” the little girl asked, excitedly.

“Well, I think we’re about to go to dinner as soon as this is over, honey,” the mother replied absently, her attention obviously on the child in the ring.

In a turn of events that must have surprised even the mother, the girl wailed her displeasure, and her response sent my heart soaring even as she cried behind me.

“But we wanted to watch the Saddlebreds!”

Something that sets Pin Oak apart from other shows is that it is a multi-breed competition – one of the last of its kind. Along with the saddle seat contingent, hunters, jumpers and Andalusians populate the show, and the effect is exciting, with many rings in use and classes running all day. There are other benefits, too – sharing a show arena with the Andalusians provides the saddle seat exhibitors with less stressful sessions, as they buffer what could otherwise have been two back-to-back classes for a trainer or rider. It provides saddle seat riders the ability to watch and learn about the other disciplines and, perhaps best of all, it allows them the opportunity to watch and learn about us. In fact, the Five-Gaited Championship took place right before the Grand Prix Saturday night, the stands full of spectators who came to watch the Grand Prix but got caught up in the excitement of five-gaited horses putting on a show, and the cheers were proof of it. 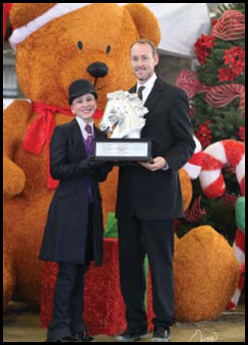 Each year, on the first weekend in December, it has become a tradition on the Southern West Coast to begin the holiday season with a very special horse show. Jingle Bell has become synonymous with a happy week full of Christmas trees, carolers, great parties in the big white tent next to the arena, fantastic trophies, whimsical decorations, excellent judges and wonderful horses and riders.

The “design team” of this wonderful show consists of two talented individuals who pull out all the stops each year to make sure everyone has a terrific time. Lance Bennett and Scott Hickey are the epitome of what every show management team ought to be. They are incredibly professional, but always with a terrific tonguein- cheek sense of humor. Each year this show has grown larger. It’s difficult to say it’s become “better,” because it’s hard to improve on perfection. But there’s always a new twist and a new surprise around every corner.

Torrential rain marred the move-in days. But the rain subsided on opening day. On the first day of the show, everyone had a variety of puddles to avoid, but that didn’t have much luck dampening spirits. The show, normally held in the beautiful Del Mar Horse Park outdoor arena, moved to the adjoining big covered arena for the week and didn’t miss a beat. Welcome gifts of chocolate peppermint bark helped everyone cope with the raindrops. 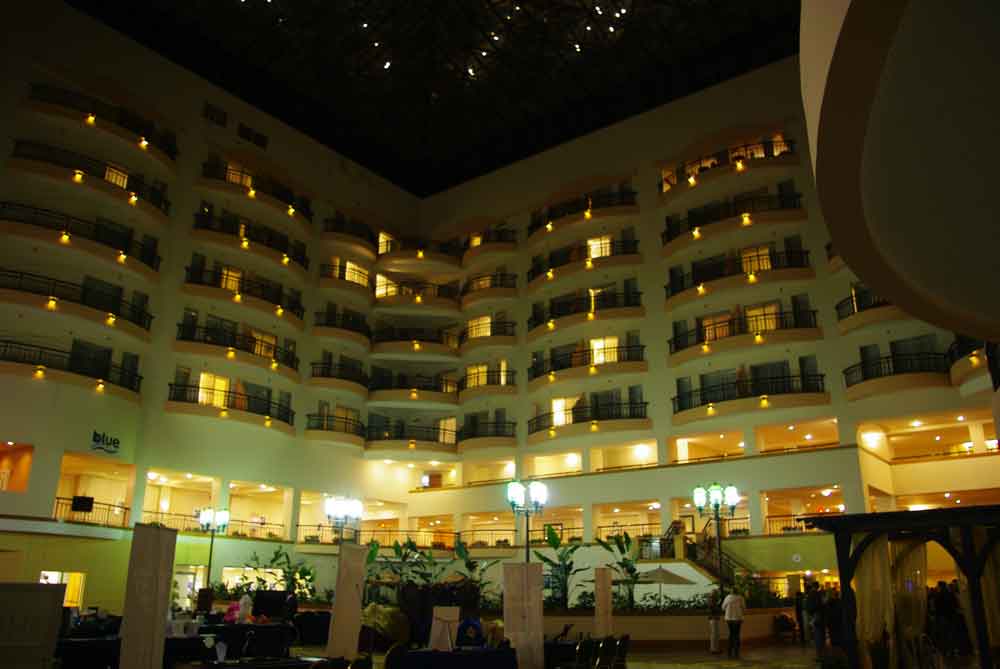 For the first time in years the American Saddlebred Horse Association and American Hackney Horse Society both held their annual conventions in conjunction with the United Professional Horsemen’s Association National Convention in Savannah, Georgia. The event raised many questions, provided some answers, and stirred lots of thought as the leaders from numerous organizations worked together to combat the many challenges facing the show horse industry … and have some fun in the process.

The schedule was filled with annual meetings for each organization, as well as forums, presentations and awards luncheons throughout the day and an awards banquet each evening, culminating with the “Midnight In The Garden Of Good And Evil” Masquerade Gala Saturday night.

Out of the event rose new officers, including the new UPHA president Tammie Conatser, as well as the newly-formed UPHA Education and Social Media committees. A silent auction and many exhibits were available throughout the week, as well as family-friendly events such as the narrated trolley tour of Savannah, which took place Friday afternoon and was free to convention attendees.

By Allie Layos and Meredithe Steinhauer 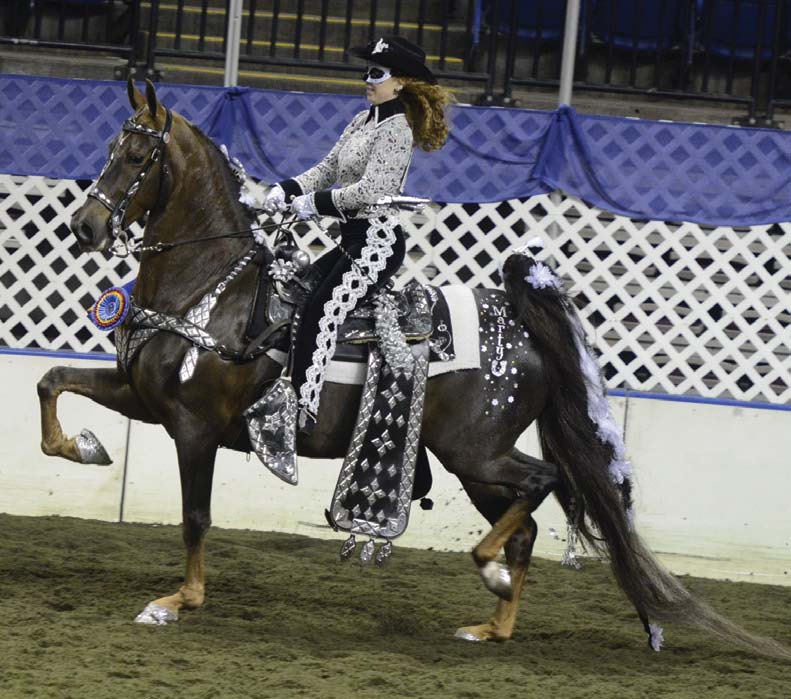 It snowed. That is one of the first things attendees will recall about this year’s American Royal. However, it certainly didn’t define the show. There was strong competition, a live band that played during each session, the Fiesta Exhibitors’ party and additional events like the 2014 UPHA Jackpot Sale where MBA’s Blue Stone topped the sale at $24,000, and a total of eight horses sold for a cumulative sales price of $107,000, and the new UPHA Open Gate Learning Center, where 18 junior exhibitors put in over 80 hours of study time during the horse show and kept up on their homework with the help of tutor Debra Murphy. Yes, it snowed, but the Royal is the Royal regardless of the weather, and there was much to warm a person on the inside.